Just over a year ago, my friends and I travelled to Kurdistan in northern Iraq. It was January 2012 and we had just spent two months in Iran. Imagine our surprise when we reached Sulaymaniyah and were greeted with Christmas decorations on the streets of this predominantly non-Christian country, and imagine our confusion as we saw huge 4×4 cars rolling past expensive hotels. Within ten minutes of being in Sulaymaniyah, it was clear that the corporate takeover of the region’s resources was well under way.

Three days ago, at 5.30am on the tenth anniversary of the invasion of Iraq, myself and two others ran up to the security fence of the EDO arms factory in Brighton and locked ourselves onto the gates, using d-locks around our necks, ensuring that the gates would not open when the workers came in for their shift at 5.45am and stopping deliveries from arriving. The other two activists superglued their hands to the gates. We remained locked there for six hours until the police removed us, and we were given support by other anti-war activists, who stayed by our sides. 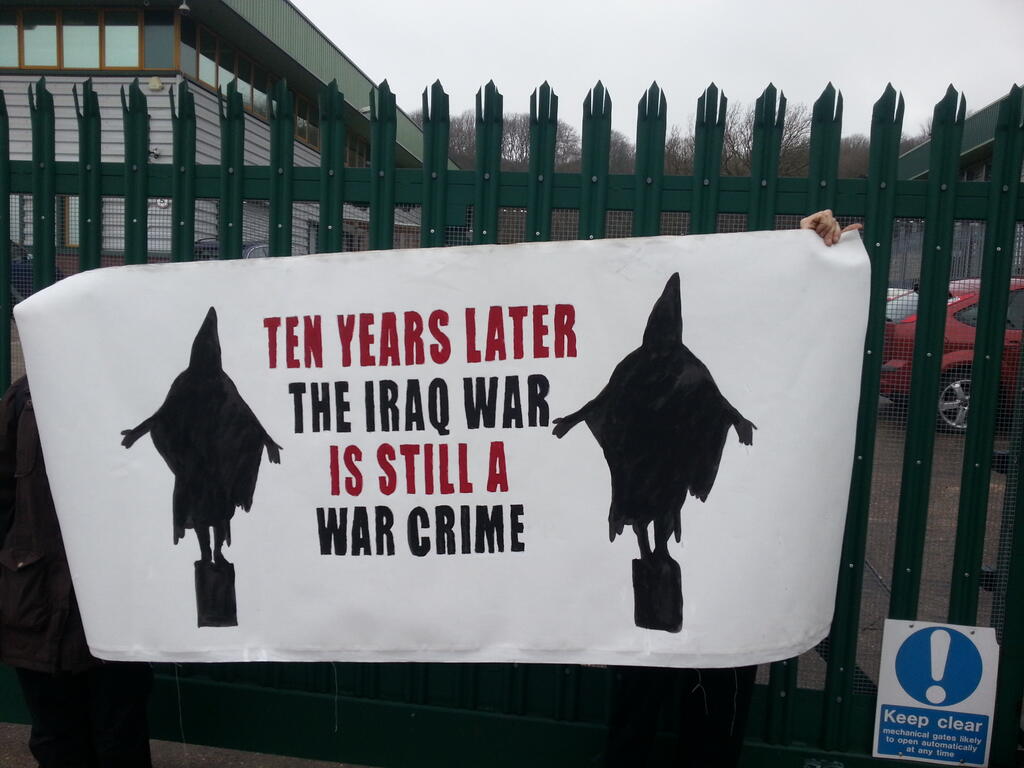 So why did I personally do this? By locking to the gates, we created publicity, maybe inspiring others that a small group of people can directly act, especially when it is clear that marching on a demonstration from A to B is just not enough. As EDO sits on a quiet hill on the outskirts of Brighton, acting unlawfully but still being protected by the police and the government, Iraq has been left in devastation, and companies such as EDO, who jointly developed and produced the Paveway bomb with Raytheon – the most-used munition in Iraq – need to be held accountable.

Journalist Dahr Jamail states that “on any given day [in Iraq] there’s assassinations, there’s detentions, there’s abductions and people being disappeared and kidnapped.” He goes on to say that there are “nightly home raids, same type of stuff that the U.S. military used when they were in Iraq. And then the types of torture being described coming out of the prisons is truly horrific: people being hung by their ankles for days at a time while their heads are in buckets of water on the ground; people having their hands tied behind their backs and then hung from their hands for sometimes days at a time; electrical shock being used on people’s limbs, on their genitals, on their tongues; men being raped by broom handles as well as bottles; women in prison being raped”. The U.S brought retired Lieutenant Colonel James Steele to Iraq in 2004. Steele famously orchestrated death squads in El Salvador in the 80s. Journalist Jamail states that James Steele was brought to Iraq “to set up the same types of tactics, the detentions, the types of torture techniques that we’re seeing rampant across Iraq today”.

Jamail also talks about a huge rise in cancer rates in Iraq, as well as horrific birth defects in Fallujah “because of the amount of depleted uranium used by the U.S. military during both of their brutal attacks on the city of 2004, as well as other toxic munitions like white phosphorus, among other things.”

In January 2008, it was estimated that the Iraqi death toll was over a million. Five years later, the figure must be substantially higher than this. 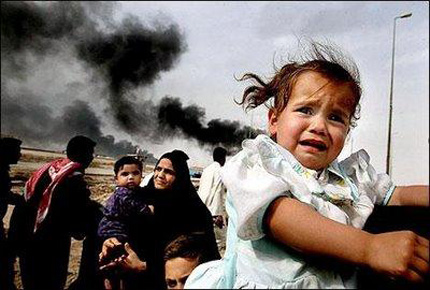 As an anti-war activist, sometimes a member of the public disagrees that the factory should close because “EDO provides jobs for the people of Brighton”. Every time I hear this, I am shocked that the lives of the people of Iraq, Afghanistan or Palestine have so little value. They are unpeople (to steal the term from author Mark Curtis), unworthy of our grief, unworthy of our outrage at their murders. But if someone does have the audacity to say this, they would hopefully be interested to learn that the 55,000 arms trade jobs in the UK are subsidised to the tune of £700 million per year. This means that the tax-payer contributes over £12,000 per arms job. Whilst we are subsidising this horrific industry of death, 56,000 NHS jobs are expected to be lost due to public sector cuts. UK military spending is the fourth highest in the world, at £39 billion per year.

There is a revolving door between Government politicians and the arms trade. Andrew Feinstein quotes, “the trade in weapons is a parallel world of money, corruption, deceit and death. It operates according to its own rules, largely unscrutinised, bringing enormous benefits to the chosen few, and suffering and immiseration to millions”.

To find out where your local arms dealers are, have a look at Campaign Against Arms Trade’s national map. You may be surprised that there is an arms company near you.

5 thoughts on “Ten Years After The Invasion Of Iraq: why we must act against the corporations thriving on death”