Chris and I arrive on the island of Kos, Greece, and decide to get the hell out as soon as we see signs for bacon and eggs. Greece comes as a culture-shock to us – the Kurdish women in baggy trousers and headscarves have been replaced by women whose tiny shorts don’t even cover their bum cheeks.

Kalymnos, our next stop, is an island ruled by goats. They stand on steep rocks, keeping an eye on humans (and with local goat on restaurant menus, who can blame them?) and they steal the food of people who dare to come onto their beaches.

Yes, the waters of Kalymnos really are this colour!

The island of goats 🙂

We move onto Patmos, which, like Kalymnos, is inundated with upper-class British yacht wankers. Their Hooray-Henry voices can be heard in restaurants, and we groan as we arrive at deserted bays, only to find that the yachties in salmon-coloured Ralph Lauren shirts have sailed there and beaten us to it.

Chris brings a Lonely Planet guide to Greece. A few years ago, I snobbily decided that I was far too independent to need such a book, but I grudgingly admit that it is helpful in order to work out how the hell to get from one island to another. However, the Lonely Planet has changed! No longer is it a book for the penniless backpacker. In fact, the Lonely Planet Greece has a section on choosing the right cruise ship! Yes, cruise ship! It also states that “yachting is an amazing way to sail the seas…if your budget won’t cover buying a yacht…you can hire a yacht without a crew…prices start at €1,200 per week”. Ironically, the same edition of the Lonely Planet fondly tells us about its founders’ days, travelling with barely a dollar between them.

We arrive in Samos with the intention of transiting through and getting away that same day. But when hitchhiking goes slowly and we miss our ferry, I sulk at the prospect of being stuck on an island with restaurants offering bacon sandwiches. But as we hitchhike, suddenly Samos changes. The car winds through mountains, limestone crags, gorges and pine forests. Samos is suddenly one of the most wonderful places I have seen in my life!

The west coast of Samos 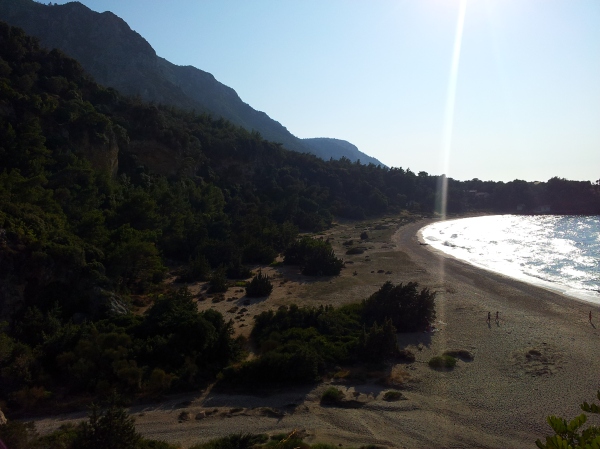 My favourite beach EVER: Megalo Seitani on Samos

Samos is full of olive groves

After a few days of walking on Samos, we arrive in a small beach town called Potami and set up our tent at the back of the beach. Suddenly, in the early hours, men approach the tent, flashing torches at us. “GET OUT NOW! This is the police! Give us your passports. Now.” We refuse to give our passports. We insist on seeing their identification. After deciding that they are probably the police, we still refuse to show our passports. We want an explanation as to why they are questioning us. Their patience wears thin and they threaten to take us to the police station. They inform us that wild camping is illegal on Samos. This leads me to rant about how land is everyone’s and that laws dictated by an elite few are ridiculous. Meanwhile, Chris is standing, staring at them with his hands on his hips and I can see that we are going to get arrested soon. A night in the cells doesn’t appeal, so we finally show our passports. The men tell us that, actually, we are not the people that they are hunting for, and that they will let us spend the night in our tent. How generous.

Our final island, Ikaria, is mostly unknown to western Europeans, and gone are the English signs. There are hints of alternative culture all around: anarchist graffiti, a women’s collective cafe, resistance leaflets about the 110 wind turbines that will ruin the beauty of the island to provide Germany (and not Greece) with energy.

For most of our time on Ikaria, we camp in Nas and set up our tent in a beautiful gorge, away from any possible police patrols. I assume that once upon a time, Nas was a hippie paradise, and there are still hints of this here. Nas has, however, become fashionable with young, beautiful city people from Athens, and a visit to the beach is like walking onto the set of a Hollywood film: the people here are so conventionally perfect that I begin to wonder if you have to pass an audition to get here. If you are untoned, pale, spotty, or hairy, you are not welcome here. Chris and I seem to have slipped unnoticed past the audition desk. The beautiful women from Athens satisfy fantasies and drape themselves over rocks whilst men take photos of them.

Chris takes a swim in the rough sea in Nas, Ikaria

Chris and I swim in a waterfall, whilst green grasshoppers jump around, orange dragonflies chase each other and turquoise lizards dash over the rocks. (We are occasionally interrupted by a ‘photo-shoot’ involving lots of pouting and draping of bodies).

I compare this Greek society to that of much of Turkey: patriarchy in two completely different forms. On Ikaria, the women live up to the mass-media/porn expectation of them and are complicit in turning themselves into objects. In Turkey, the women spend most of their time in the house whilst the men are out on the streets or inside the men-only tea rooms. Our anarchist-feminist bubble in Brighton, which looks beyond gender-stereotypes and patriarchy, seems like a million miles away.

I breathe a sigh of relief when we board a ship to Athens and say goodbye to a narcissism that I have never witnessed before. Chris flies home, whilst I hitch England-bound through Europe.

For fellow-hitchhikers: Hitchhiking around the islands was very easy, although we only half-heartedly tried once to hitchhike a yacht between islands and were quoted some ridiculous price of a few hundred Euros, so we paid for ferries from island to island. You need to plan a little bit if you are island-hopping, as some ferries only go once or twice a week. Travel agents can help with timetables. You may not be able to hop between small islands (you can only get to some of the small islands from the larger islands), meaning you may have to double-back on your route sometimes.

A final note: WordPress enables you to see what search-engine searches people type in order to arrive at your blog. Quite often, people have entered searches such as “girl f*ck hitchhiking” or “lone girl hitchhike sex” and arrive at my blog. This blog post will, no doubt, lead other people here who are looking for ‘harmless’ fantasies on the internet. I urge you to think about whether your fantasy is actually harmless, or whether you are part of upholding the patriarchy that I talk about in this post. Why don’t you do a search for ‘feminism’ instead? 🙂

4 thoughts on “A Greek Island-Hopping Experience…”