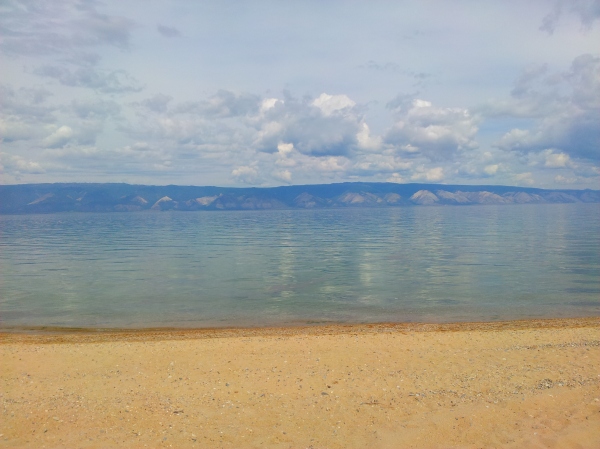 We arrive in the city of Krasnoyarsk, 4098km from Moscow, and people are friendly! We visit Stolby national park and make friends with lovely people. But Krasnoyarsk, like every other city we pass on route, is as Soviet as ever. We are now as east as Mongolia, and it still feels like we’re in Europe, with the streets filled with European-looking inhabitants. I realise that I know nothing about Russia’s colonial history and the destruction of Siberia’s culture.

“It’s depressing to know that Europe stretches on and on and on, all the way to China,” Chris says.

Our train journey to Baikal is amazing. Everyone around us is happy, and their laughter fills the carriage. A young boy and his grandmother even invite us to visit them in their city. We pass pine forests, villages and abandoned factories. I finally feel like I am enjoying the Trans-Siberian. But then our train stops in the middle of the night and we all get out for fresh air. Another train pulls up next to us. Through the darkness, we see men in the train, trapped in cages. Their hands are holding the bars as they try to catch a glimpse of the outside world. A military man strides up and down the carriage, keeping guard. The sight is terrifying to me. Now I feel like I am in Siberia – the land famous for labour camps , banishment and deaths. I get back on the train and cry.

Arriving in Irkutsk the next day, it finally feels like we’re in Asia and not Europe, and there’s more diversity on the streets. However, we’re tired of the usual Lenin statues and streets named after Karl Marx, so get out of Irkutsk as fast as possible!

Lake Baikal is the world’s deepest lake: in some areas it’s one mile deep! We head to Olkhon, an island in the middle of the lake. Olkhon is a famous site for shamanism. 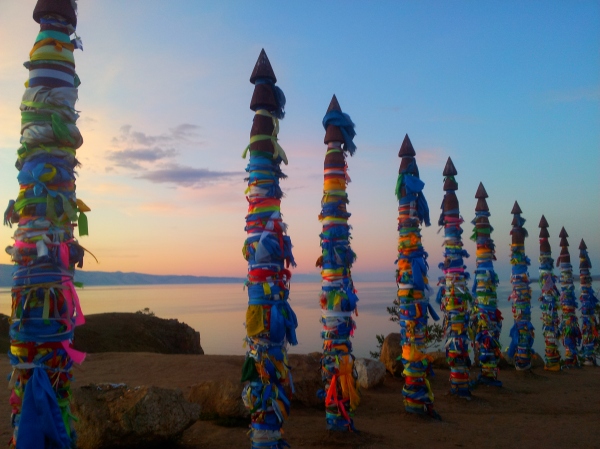 The entrance to Shaman Rock on Olkhon island, a sacred place for local Buryat people

A sacred tree, with Shaman Rock in the background 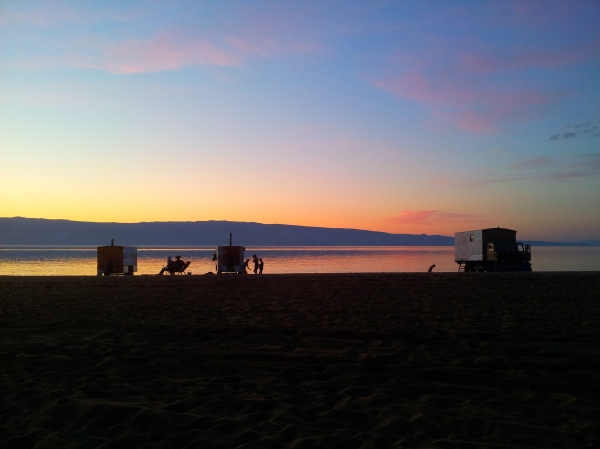 Saunas on the shore of Baikal 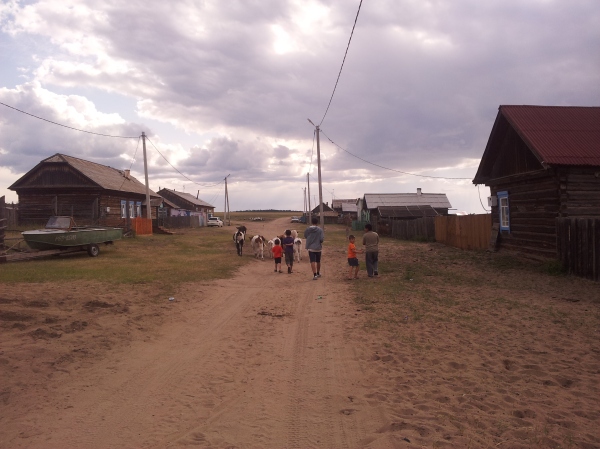 A village on Olkhon island

It’s legal to wild camp here, and we sleep on the shores of the lake, close to the main town, Khuzhir. I am expecting a peaceful, spiritual place, but instead find hundreds of partying people, also camping on the beach. Russian tourists drive their cars right onto the beach and camp next to their vehicles: seemingly no-one is capable of walking to enjoy nature. They then blast music out as loudly as possible into the early hours. And if they’re not doing that, they’re speeding on the beaches with their quad bikes. 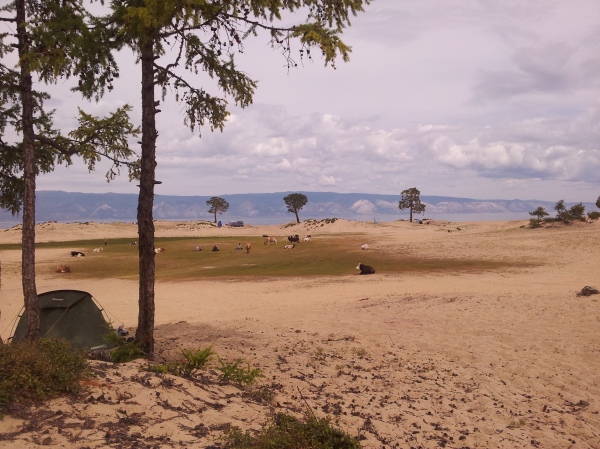 Our fire, made with dead wood!

Just one of the hundreds of lazy tourists at Baikal, driving their cars onto the beach

Baikal is stunning – the water shimmers a silver colour – and you can drink the water straight from the lake. At first I’m hesitant to drink the water that’s right next to partying campers, but it really does taste good. But because of Baikal’s huge rise in tourism (which we are unwittingly contributing to) there’s broken glass all over the shore of the lake, huge amounts of rubbish, and disgustingly filthy shitty toilets (“why can’t people aim their poo into the toilet?” I moan). 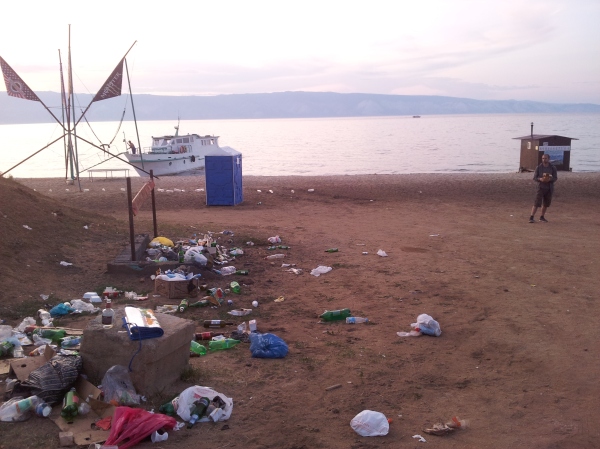 After four days of camping on the beach, I’m ready to leave. I’m upset by the lack of respect that the campers have for the nature that they have come to relax in. People are chopping down beautiful live pine trees for camp fires and I wonder how the forest will survive the summer, and how the water can stay so pure. I find it ironic that people tie ribbons to trees in appreciation of their sacredness, and yet 100 metres away, tourists are acting so disrespectfully.

We want to cross to the east side of lake Baikal, a route that no other travellers seem to take (everyone else double-backs). The boat’s a shocking 50 euros each, but amazingly, we are not asked to buy a ticket and save ourselves 100 euros!

Hitchhiking along the east shore of Baikal, down to the Mongolia border, is serene. Our Buryat driver stops at sacred shamanist sites and throws offerings of coins out of his car window. For anyone planning to visit Baikal, I recommend coming to the east side, which sees barely any tourists. 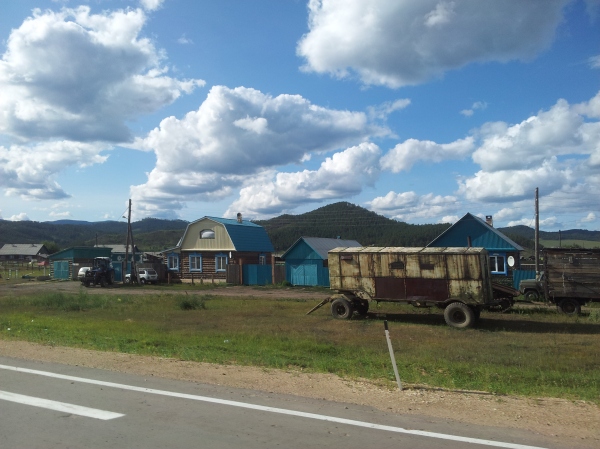 Siberia – along the east coast of Baikal

When we arrive at the border there’s a massive queue of Mongolian cars. The sound of happy laughter fills the air, and a family beckon us to cross into Mongolia in their car. The border is humiliating. The Russian guards treat Mongolian people like they’re worthless. When it’s our turn to cross, the female border guard yells closely into the face of the meek Mongolian woman that we’re hitchhiking with. It’s the most racist border that I have seen, and I’m relieved when we enter Mongolia and we’re greeted with smiles.