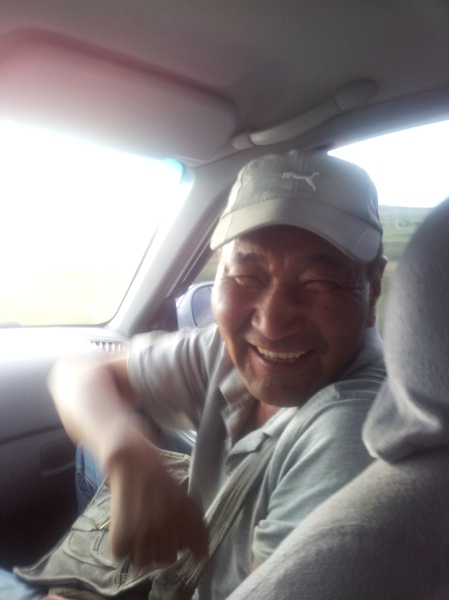 “We are hitchhiking. We have a vague destination but it’s not very important to us when we get there. We have a tent, lots of food and water, and we don’t want to get a mini-bus or taxi. We don’t want to stay in a hotel. Please don’t worry about us!”

This is what I would say to everyone, if only I could speak Mongolian. But the problem with hitchhiking in Mongolia is that we can’t communicate. We have a phrase book, which proves invaluable. Every car stops for us, more out of concern or curiosity than knowing what we’re doing. It’s unsurprising that people are confused: we are not booking an expensive tour of the country and we are not hiring a jeep and a driver. In Mongolia, this is a Tourist Rarity. We meet various Europeans who are paying $700 for 8 days in the Gobi. (I blame this reliance on tours on a certain famous guidebook).

Because everyone is so friendly, hitchhiking is easy, despite locals saying that it’s not possible and that there will be no cars going in our direction. (If I could speak Mongolian, I would ask them how they can possibly be 100% certain that there are no cars).

I’m struck by just how green Mongolia is. We’re here in August, seemingly the most perfect time of the year. There are wild flowers everywhere and herbs to pick for dinner, and even in parts of the Gobi desert there’s rhubarb and lemon balm growing.  I had thought that it wasn’t possible to grow anything in Mongolia, but I was very wrong! 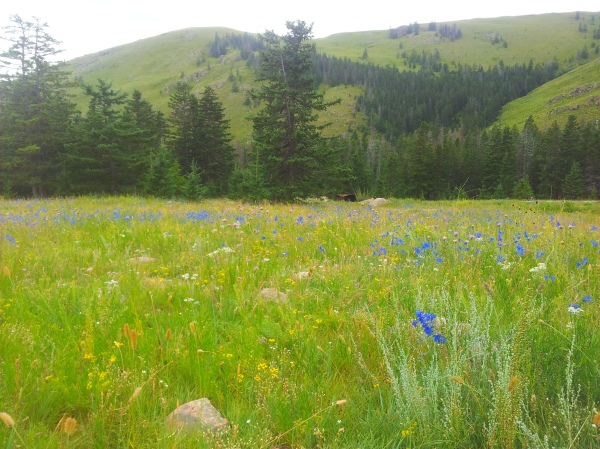 Ulaanbaatar, the capital, is an ugly, polluted city with far too many cars. The motto here seems to be BUILD BUILD BUILD: I have never seen anything like it. New luxury apartments are popping up everywhere and after an hour of searching for the city park, we realise that it’s been built on. Almost half of Mongolia’s population lives in this city. We only enjoy our stay here because of our amazing BeWelcome host, Uli, and because of the surprising abundance of vegan restaurants (mmm, cheese cake!).

After leaving Ulaanbaatar, we quickly realise that overland travel in Mongolia is not for people with weak stomachs. We are thrown around in our seats as we travel from bump to bump on dirt tracks, dust filling our lungs. I feel like I am in a real-life car racing game. In one car that we hitchhike in, a man has a serious asthma attack because of all the dust. In another car, the driver is a maniac and his three year old daughter vomits five different times as we’re thrown into the air, our heads smashing into the roof of the car.

“Hitchhiking in the Gobi desert is dangerous and stupid”, says the Lonely Planet. But we do it anyway. But when Mongolians tell us that it’s not possible, we wonder whether we are being stupid, or whether it’s the same as every other country: completely possible but all the locals tell you that it is impossible. Worried that we’re going to be stranded, Chris fills his rucksack with litres and litres of water and lots of food. It turns out that it’s perfectly possible to hitch the Gobi, providing you hitch from village to village. You need a good map (we had a shit one!) with the villages/towns marked on it. The main problem is finding the correct direction, as there are many different tyre tracks. We spend about an hour in each small Gobi town, asking locals which tyre tracks will lead us through the desert to the next town.

Trying to find the correct direction to the next town

A road through the Gobi desert

This green place, Yolyn Am, is actually in the Gobi! 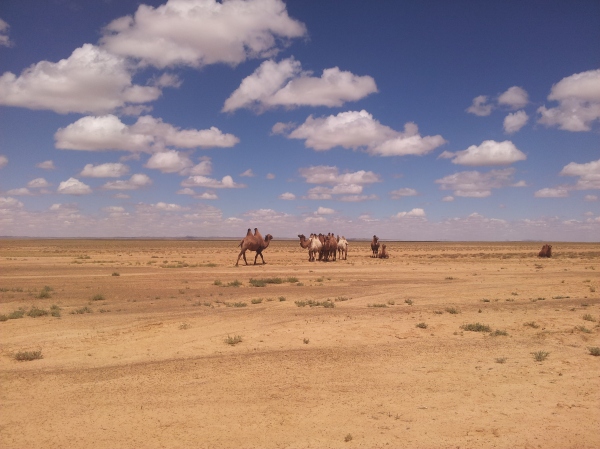 Waiting for a car……

The route through the Gobi from Dalanzadgad to Sainshand takes us three days, even though it’s only 500km, and we get stuck for a full 24 hours in a town called Mandah.

One day, we are driven to a friendly family’s ger (the Mongolian name for a yurt) in the middle of nowhere. There’s raw meat hanging in the ger. We’re then offered some animal to eat. “We don’t eat meat,” we say, and it’s accepted without question. We’re offered warm milk and I reluctantly accept it, not wanting to offend our hosts. It’s a huge struggle for me to drink it – I haven’t had milk in many years – and it’s horse’s milk, a new and revolting taste. I vow to refuse it for the rest of my time in Mongolia.

“Come!”
Our host beckons us outside with a huge smile. I walk out of the ger and see a sheep pinned to the ground. The family is grinning at me.
“No no no no no no!!!” I say, pushing Chris back into the ger before he can see what’s happening. We stay inside as the family kills the sheep and chops up various pieces of his or her body. The father of the family comes into the ger, his hands covered in blood. Then something  – we think it’s the sheep’s stomach – is brought inside and put next to my bag. Then the head is brought in in a brown sack and put on the floor near us, the nose poking out of the bag. Various parts of the dead sheep are wrapped up in plastic and put in the car, alongside our rucksacks.

The family then eat another creature together. They don’t waste a single scrap of meat and the bones are left bare.

At our driver’s family home

Inside the ger…spot the meat hanging up in the background

Horses tied up outside the ger

As vegans in Mongolia, it’s not difficult to eat. We can get food, even fruit and vegetables, in most shops. We can’t share a family meal in a ger, but we are happy to miss out on the experience! The problem with being vegan is witnessing our beautiful non-human friends being killed and seeing their body parts and bones all over the countryside.

One night, we shine our torches in the dark, searching for a decent camping spot in the Gobi town of Manlay. I stop walking suddenly.
“Chris, are these bones? Shit! There’s bones. Everywhere.”
We’re walking through a sea of bones.

And as we search for another camping spot in Mandah, we come across lots of furry, freshly amputated camels’ and horses legs.

This is me, camping, and proving that it’s easy to get your greens in Mongolia!

One day, hitchhiking through the Gobi, we’re picked up by a Chinese mining company’s Mongolian workers and an hour later we find ourselves at a drilling site. A worker tells us: “We’re looking for gold. We haven’t found any yet!”

The workers all live in gers onsite, in the middle of the Gobi. We’re invited in for lunch.
“No thanks, we don’t eat meat.”
“Would you like Chinese food?”
“Chinese food?! YES PLEASE!!!”
We’re offered rice, noodles and fried vegetables and we can’t believe that we’re eating such a vegan treat in the Gobi. The difference between Chinese and Mongolian cultures is stark: on one side of the ger the Chinese people are eating their rice, and on the other side of the ger the Mongolian workers are chopping up raw body parts. A goat’s head lays on the floor, along with four hooves.

Mining is changing Mongolia fast and it will soon be its biggest economy. We travel past a handful of mines on our short visit here. Mongolia is rich in gold, copper and coal and greedy corporations from the UK, Australia and China are bulldozing chunks out of the land with their opencast mines. Mongolia must be a capitalist’s dream: a nomadic culture, meaning that there’s no ‘permanent’ population to displace, and vast expanses of land without private owners or fences to deal with. It’s clear that Mongolia’s on the cusp of huge change and tarmac roads are being built to suit mining companies’ routes.

On another day, we’re taken to Naadam, the most famous festival in the country. It’s a sports festival, with horse racing, wrestling and archery. We immediately realise that the festival is sponsored by mining corporations, and they’re wooing the locals with free food and vodka in their corporate gers. One woman invites us into her ger and tells us all about her company, thinking that we’ll be impressed. 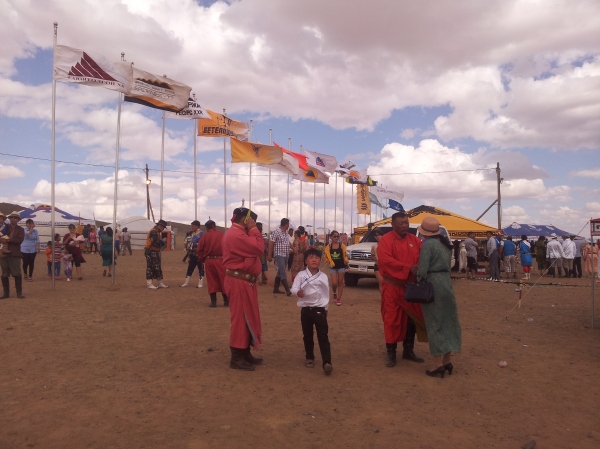 Naadam festival: the corporations have their flags flying

A mining company worker takes this photo as a lovely PR ploy: horse riders at Naadam in the corporate ger

I wonder how the nomadic culture can possibly live in harmony with these corporations. Will they lose their right to the land that they have roamed on for generations? And what about access to their scarce water? (One mining company brochure states that it will use 151 litres of water per second!) Mongolia is officially a Buddhist country, but its roots are still shamanist. To many, the land is sacred and there are spirits in their mountains. 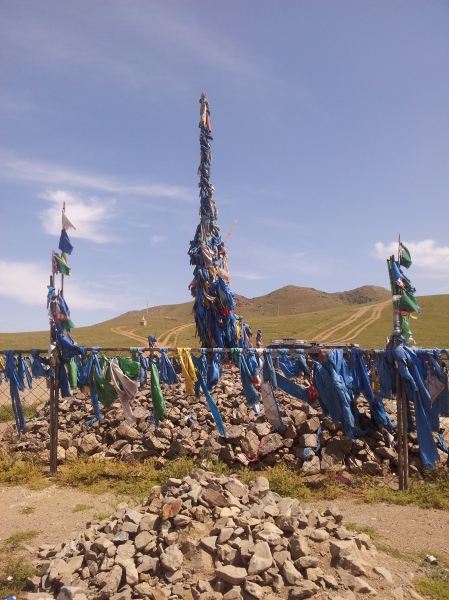 Shamanic ovoo: they are found all over Mongolia

I feel privileged to have travelled in Mongolia now, meeting the smiling people, seeing the nomadic culture, and travelling on the bumpy, dusty tracks, which are soon to be replaced by tarmac.

7 thoughts on “Brighton to Beijing overland part 4: The green grass of smiley Mongolia”