Martin drinking tea in the Shrine Of Man

You know you’re in a polluted place when your bogies go black and your chest starts to hurt. I’m back in South (Iraqi) Kurdistan, which is also known simply as Bashur, meaning South, to Kurds.

I’m with three friends, trying to cross the border into Rojava. Bureaucracy, politics and crooked governments have ensured that it’s difficult to enter Rojava from this border, and impossible from the Turkey side (unless we want to be shot).  So we pile into a taxi to Erbil (Hewler in Kurdish) to try to sort out our papers (no-one other than me fancies hitchhiking, what with ISIS strongholds not far away, and there’s no buses).

“Shit shit SHITTT!” I moan under my breath as the taxi driver races at high speed up to the back of a truck, then just before crashing into it, swerves to overtake. He does this again and again, weaving through the hundreds of trucks that clog the safe route to Erbil. Everyone wants to avoid Mosul. The smell of petrol fills the car. We pass oil tanker after oil tanker, and truck fumes fill our lungs.

It’s exciting to come back to Erbil, a city that I visited four years ago. It’s changed since then. It’s more traffic-clogged, and the massive white Toyota SUVs (the car of choice for South Kurdistan’s oil-rich elite) mix with thousands of cream-coloured taxis.  People have migrated here from the Arabic parts of Iraq since ISIS took over their cities, and others have come from Syria. This makes a vibrant and friendly mix of people. 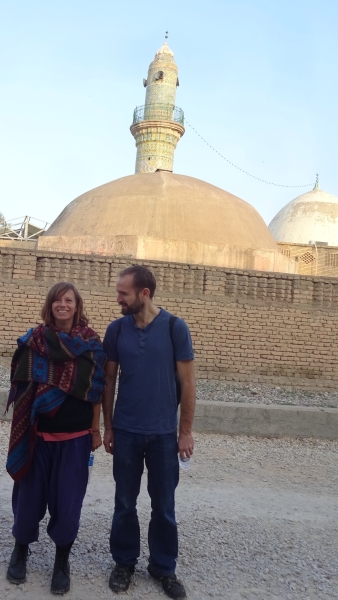 Standing with Chris on my second visit to Erbil citadel, being rebuilt by UNESCO. UNESCO, if you’re reading this blog, you still haven’t replied to my email that I sent in January 2012, asking you whether you have given any compensation to the families that you have displaced in your gentrification venture…..funny that.

Vegetarianism is no longer a problem. New friends from Fallujah serve us falafel, and we chat with others from Mosul and Kobane. People sit and smoke shisha pipes whilst we buy juices from the many juice stalls. We are invited in for tea in a saz shop, as the friendly owner shows us the hospitality that is so typical in Middle Eastern cultures. If I wasn’t so incapable of playing musical instruments, I would buy a beautiful saz.

We lazily drink tea after tea in the Shrine of Man (my name for it), a cafe on the square of the old town. Photos of GREAT MEN (spot my sarcasm!) adorn the walls. And on the streets there’s barely any women around (although admittedly there’s more than on my first visit in 2012, maybe because of the people who have settled here from Syria). The lack of women in public places in South Kurdistan makes it strikingly different to the other regions of Kurdistan.

Men, men and more men are celebrated on the walls of the Shrine of Man. Oh, how great it must be to be a man!!!

Martin with a backdrop of men (and a citadel!)

Of course, there’s also a wealthy area of Erbil that’s filled with hotels and modern shopping malls, but these areas always fill me with slight disgust, and I never photograph them!

After a few days in Erbil we brave the chaotic, truck-clogged route back to the border of Rojava, passing a hundred checkpoints. With the right papers, we’re finally allowed to cross the border, and we board a boat to cross the river that separates Bashur from Rojava, or South from West. I leave Bashur with my lungs filled with fumes and an irritating cough that will last for weeks.

With our taxi driver. Wherever you go in the world, you can bet that taxi drivers will try to rip you off, and our new friend is no exception!

Boarding the boat to cross the border to Rojava

(Read about my first visit to South Kurdistan here!)

2 thoughts on “Black Bogies and Phlegm in Bashur”