You know that a city is too gentrified when you start to see cafes selling cupcakes. I have a particular problem with cupcakes because they’re just fairy cakes, similar to those that we used to make in primary school and sold for 10p. But rebranded as cupcakes, they’re now sold for £3 per tiny cake.

Gentrification in progress. There’ll be cupcakes! an artist’s mural announces on London Road in Brighton.

I have called Brighton – and the London Road area – my home for a number of years. Brighton’s a great place. Small enough that you run into friends on the street, and big enough to be a hive of alternative cultures and projects.

But Brighton is changing. There are cupcakes. And a lot of them. Chris, who has been a Brighton resident for a couple of decades, remembers the city when it wasn’t so expensive, where squats and anti-capitalist spaces were easy to find.

“This is where the old squat to give shelter to the homeless was,” Chris tells me as we walk around the city. “This was a community garden,” he says as we pass the massive new glass apartments near the station, which have presumably been purchased by London commuters.

As we walk down London Road, Chris points out many more buildings that used to be squats. The old church, now Emporium cafe, was squatted twice as a convergence centre for Smash EDO’s demonstrations against the EDO arms factory. Hundreds of people slept there.

The old Co-op department store on London Road – which remained empty for years before it temporarily became the home of hundreds of squatters at the International Squatters’ Convention – has been turned into new student flats. (A housing co-op in Brighton asked whether they could convert this empty building into affordable housing. Needless to say, they weren’t allowed).

The closed-down Blockbuster Video was squatted a few times, ensuring that people could have a basic human right of having a roof under their heads without having to pay money. I believe that it’s now a super-gentrified pizzeria.

More recently, activists squatted the old Barclays bank and turned it into a very short-lived social centre, open to the public, called the Radical Bank. It was swiftly evicted.

Unfortunately, I have no recollection of most of the alternative spaces that Chris tells me about. Cities change and become more capitalist. Land is grabbed by those who want to make a profit by building apartments for Londoners or by creating boutique hotels.

Many of the alternative, anti-capitalist residents of Brighton seem to have given up on the city, choosing instead to move to Bristol or further afield. Maybe all of the signs for cupcakes are a message that the damage has been done beyond repair.

But of course, gentrification assaults the working classes the most.

As part of gentrification, the 2012 anti-squatting law – concocted by Hove’s own right-wingers in the local Tory office – criminalised squatting, demonised the poor, and ensured that Brighton and Hove became the most difficult place in the country to squat. Because of this, homelessness has increased and deaths on the streets have increased. As I said before, a roof over each person’s head is the most basic of rights.

A shrine at Brighton clocktower to the homeless who have died 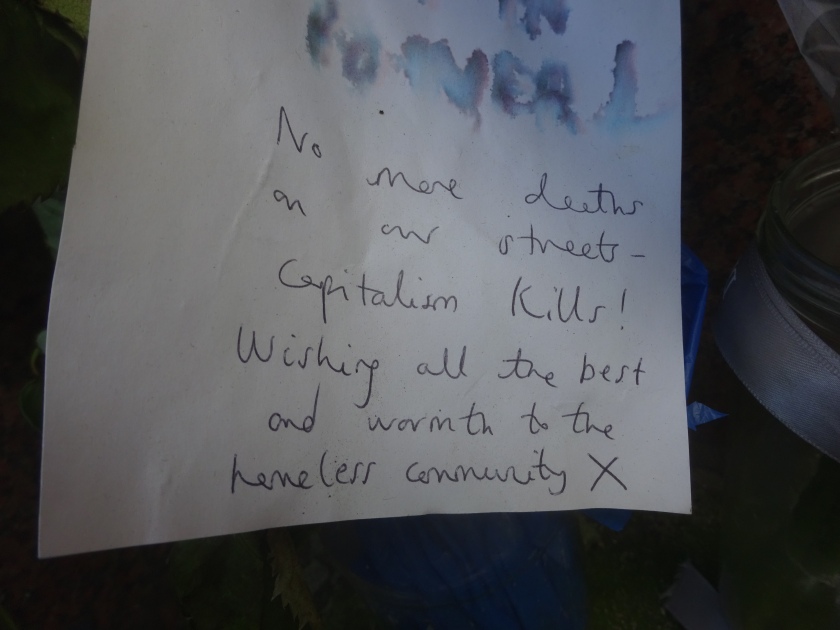 Brighton is a university town. Because UK universities are now the most expensive in the world to attend, inevitably this means that a massive population of Brighton student residents are far more wealthy and well-spoken than they used to be. This has had a profound effect on London Road, traditionally a very poor, working class area. New cafes and art galleries are popping up all over the place. The Open Market on London Road has also been gentrified, and many of the people who rented stalls cheaply were forced out.

The council has had a big hand in attempting to ‘clean up’ London Road and price out the locals to make way for workers from London. It calls the gentrification regeneration.

The council doesn’t hide the fact that it puts investors’ interests first. It states on its website:

“The vision is to make London Road attractive for business investment and a popular destination for customers to spend their time and money.”

In capitalist Britain, its all about money. There is, of course, no mention of regenerating London Road for the existing working class residents so that they may live in more pleasant surroundings.

A few years ago, London Road was chosen to be an area of focus for retail celebrity Mary Portas’s Portas Pilot scheme. Appointed by David Cameron, Mary Portas set about ‘regenerating’ areas of towns that she deemed were in a bad state. On the surface, the scheme doesn’t seem too evil, and many of the new businesses popping up on London Road are independently run. But this scheme doesn’t concentrate on rejuvenating the areas for the existing poor residents. Instead, it aims to demonise the poor.

Working with the London Road Town Team in Brighton, the scheme has attempted to cleanse the area of those it deems “undesirable”, i.e. those who are not spending money and who make the area unattractive to investors. The scheme introduced private security guards (known as Town Centre Liaison Officers) to roam London Road, hassling those that they deemed wrong for the area. Not only do we have the most CCTV in the world (there’s now even CCTV on the outside of buses in Brighton), we are subjected to private security thugs marching down our streets in the daytime, as well as the police.

According to the London Road Town Team,

“The most successful improvement was the introduction of the TCLOs, the boys in blue as they became known, who patrolled the streets to deter trouble makers and undesirables.”

When these private security guards first appeared on our streets, a few of us asked them who they were and what their powers were. “We give information to the police, who then give people ASBOs based on our information,” the security guard told us.

Having watched these security guards, I have seen them following the only non-white person from shop to shop; I have seen them hassle the drinkers who need empathy rather than aggression, and who were minding their own businesses anyway; and I have seen them hassle buskers. Ironic, seeing as one of the aims of the ‘regeneration’ of London Road is to be a hub for arts events and creativity. Other friends have seen homeless people being wrestled to the ground by the thugs. Chris was even pinned to the floor of Sainsbury’s by two of them as he and some others held a Palestine solidarity demonstration. “We know who you are and we know where you live!” one guard said to Chris as the thugs were piled on top of him.

When I lived in Berlin years ago, activists and residents marched (and probably still march) on the streets against gentrification, and there was frequent graffiti yelling “YUPPIES RAUS! (yuppies out!)” Unfortunately, I can’t imagine the residents of the poor end of Brighton protesting on the streets about the impending rise in rents and the forcing out of “undesirables”.

Having said all this, I love Brighton! So it would only be right to mention some positive sides to the city.

London Road
There’s a few amazing places to discover on and around London Road:

The Cowley Club
The Cowley is an anarchist social centre. It’s a workers’ co-op, collectively run by volunteers (with no management) and it’s a cafe, a bar, a club, a bookshop a library and a cinema, depending on when you visit. It’s CHEAP, with a cup of tea costing 60p (as opposed to the new cafes popping up selling soya lattes for £3), and it’s completely vegan, what with those who run it being anarchists or activists. The Cowley hosts meetings of activist groups, but it’s also the best place in the world to meet non-activist people who don’t quite fit into the individualist capitalist society. The daytime cafe is full of weird and wonderful people, and that’s its appeal. 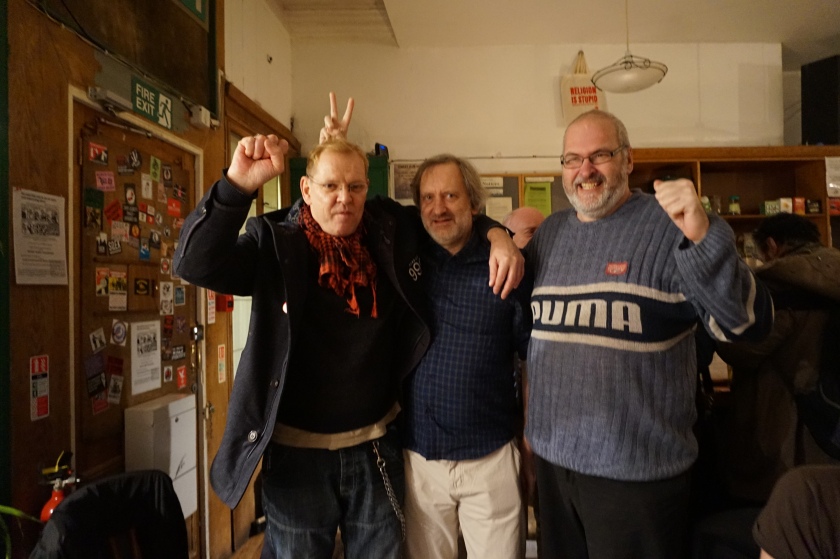 “This is the council-commissioned counter-culture,” Chris laughs as we walk past this nationalist graffiti on Providence Place, behind London Road. Every time it’s graffitied over, it’s unfortunately quickly repaired.

St Barts church
This may seem like a strange recommendation from an anarchist-atheist, but if you have never been to St Barts church, just off of London Road, then GO! Possibly the biggest church in England, it’s breathtaking inside. London Road is loud, busy and smoggy, and I get a sense of overwhelming CALM whenever I go into this building.

It may seem surprising that, having complained about gentrification for the entirety of this blog post, I then state that the North Laine is a highlight of Brighton. But as far as living in a concrete jungle goes, this area is beautiful. It’s full of street art (although it’s given permission by the council, making it seem far less rebellious, and therefore, less beautiful). The lanes are full of cheap independent second-hand shops, colourful bright terraced houses, good old-man pubs (although they are swiftly being renovated to become generic, clinical, soulless bars)..and it’s also home to Brighton Buddhist Centre, which is the amazing haven where I do meditation. More and more people seem to be wanting to learn meditation, and this place does free drop-in guided sessions (you pay by donation), with free cups of tea and amazing people. 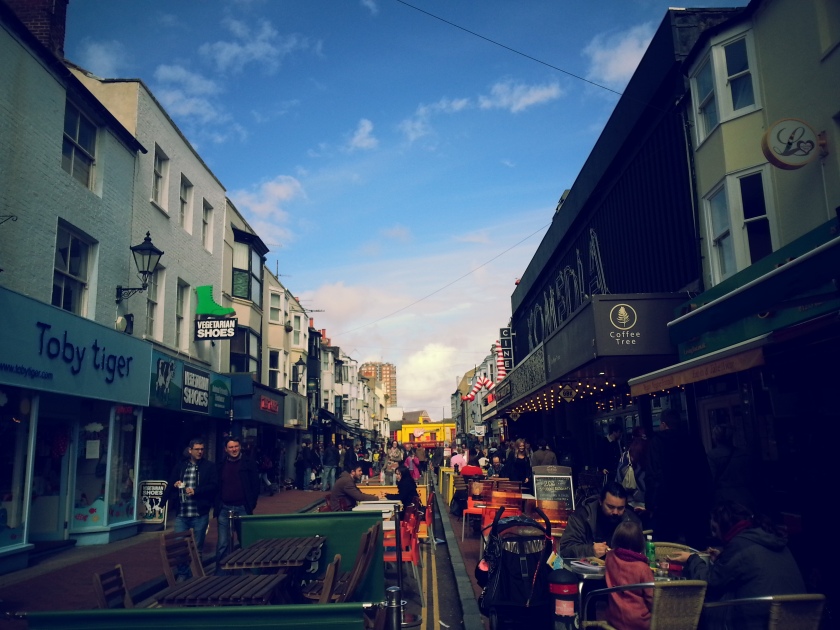 Unemployed Centre
Brighton Unemployed Centre, off Carlton Hill, is the only place in town cheaper than the Cowley to get lunch. Meals are £1.50 and this place is amazing. They provide support for people who need benefits advice or housing help…they provide courses for practically no money, they have a creche, a free shop (where you can take clothes and food for free), and are a godsend for poor people. They even have a cheap organic food shop.

Lewes Road Extra Mural cemetery
This is by far the most beautiful place in the whole of Brighton and in places feels quite wild and untouched. I have spent countless hours reading and sitting in silence, listening to the birds and observing the changes of seasons on the trees and flowers.

Coachwerks
Coachwerks is full of workshops, a vegan brewery, an organic wholefood shop, a vegan cafe, and hosts live music nights and other events. It promotes the concept of workers’ co-ops where people can work for themselves, without hierarchy, and without bosses.

Finally…The hardworking volunteers at the Real Junkfood Project feed people by donation most days of the week at the One church and other locations. The Love Activists also raise awareness of homelessness and provide free food at the clocktower on weekends.

Despite the mass-migration of activists to Bristol and further afield, there are still many grassroots, radical activists in the city who attempt to make changes to capitalist, individualist society. There are anti-fascist groups, Palestine and Kurdistan solidarity groups, animal rights groups…the list goes on. And there’s the occasional political art which pops up and brightens the streets. 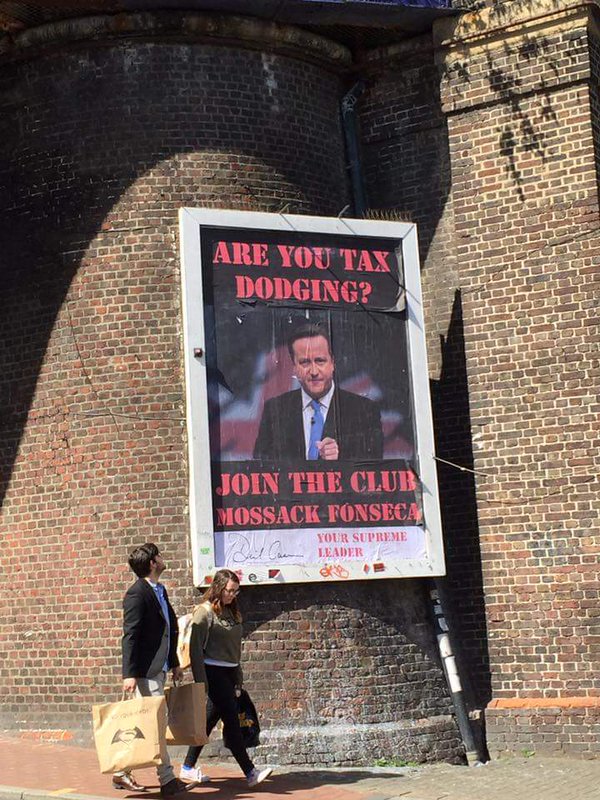 This mural was by the station earlier this year 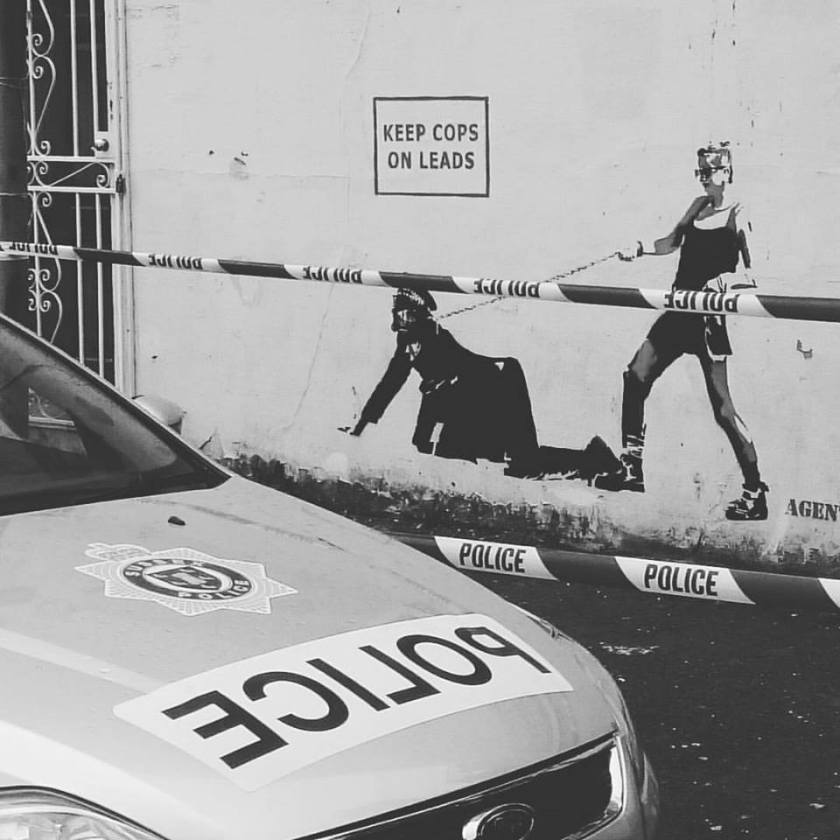 And, of course, it’s wonderful to live near the sea.

2 thoughts on “Brighton: the invasion of the cupcakes!”