Chris and I spontaneously decide that we’re going to walk a hiking trail which spans the length of New Zealand – or Aotearoa in Māori – some 3,000km. The trail is called the Te Araroa. One month later, we arrive in Auckland.

“My god, it’s like we’re in Liverpool,” I say as we reach the centre of Auckland. After months of travelling through Asia, it seems absurd that we’re the furthest from home we’ve ever been, and yet we find ourselves in a slightly different version of England.

“This is the first country I’ve been to outside of the UK and Ireland which was colonised by the British, but where the colonisers never left,” Chris remarks as we try to get over our culture shock.

I’m sure that I’ve read that the north island of New Zealand is ‘sub-tropical’. But the weather makes me feel like I’m in Margate on a cold, windy, grey day.

My next thought about New Zealand is how unbelievably expensive it is. “HOW MUCH????!” I yelp before buying anything. Within a few days I have spent much of the money in my bank account and I wonder how I will afford to be here for six months.

It’s really easy to hitchhike from Auckland to the start of the trail. New Zealand is full of really friendly, helpful people who are not fearful of hitchhikers – unlike in other industrialised countries – making it one of my favourite countries to hitch in. 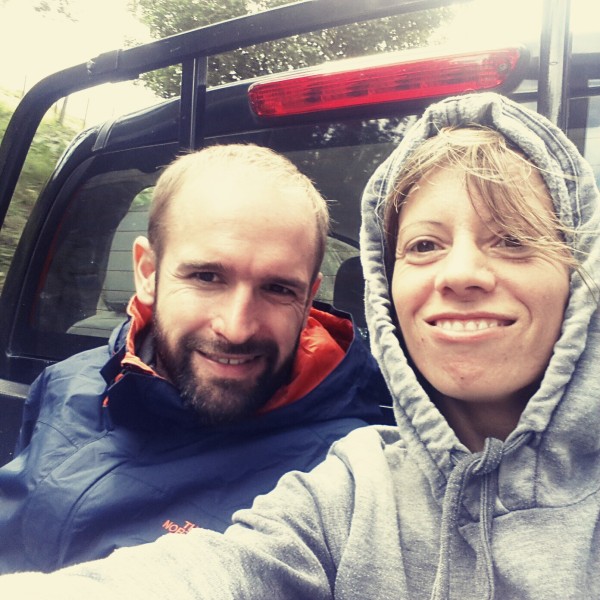 We’re really  excited as we hitch in the back of a pickup truck to the trailhead!

We have our first encounter with a racist white New Zealander when we stop off in the town of Whangarei. “The Māoris are given everything on a plate. They take, take take,” she says. I’ve heard similar racism all over the world. Europeans say it about the Roma population, some Turkish people say the same about Kurds, some white Australians say it about their own indigenous First Nation people.

Whilst hitchhiking, others we meet are also racist: “There was a peaceful tribe living in New Zealand before the Māoris, and then the Māoris arrived and ate them all,” one man says to us. A few drivers tell us, “be careful in the town you’re heading to,” as we hitch up to the predominantly Māori Northland. “It’s unsafe. And make sure you stay in campsites where you can keep an eye on your stuff.”

So it’s refreshing when we hitchhike with Clyde, who tells us that there is a resurgence in Māori culture and language. “My generation lost its culture,” he says. “But it’s been revived for my daughter’s generation.” 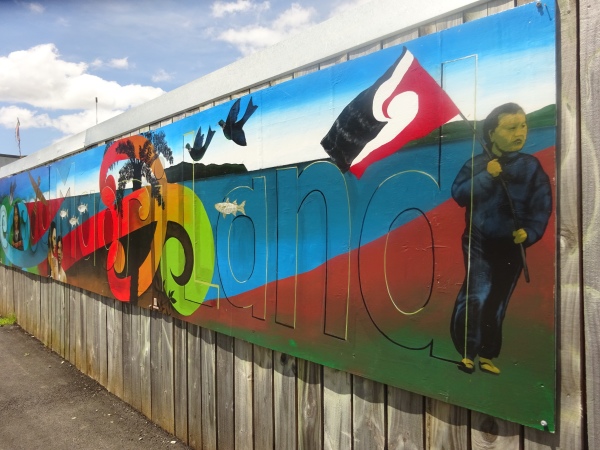 The Te Araroa hiking trail runs from the northern tip of the north island, Cape Reinga, to the southern point of the south island, Bluff. It takes between three and six months to walk, depending on how slow you are and how many rest days you have.

I’m not excited about the first few days of walking the Te Araroa trail. There is a beach called Ninety Mile Beach, and we have to walk EIGHTY kilometres of it. 80km in a monotonous straight line! 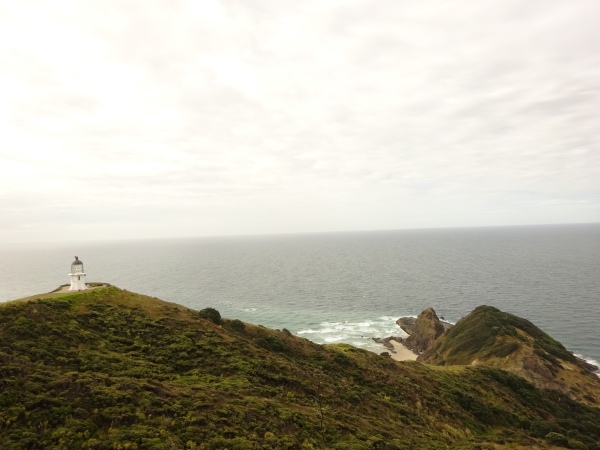 Cape Reinga – the starting point of the 3,000km long Te Araroa. Yes, we could be in Cornwall. 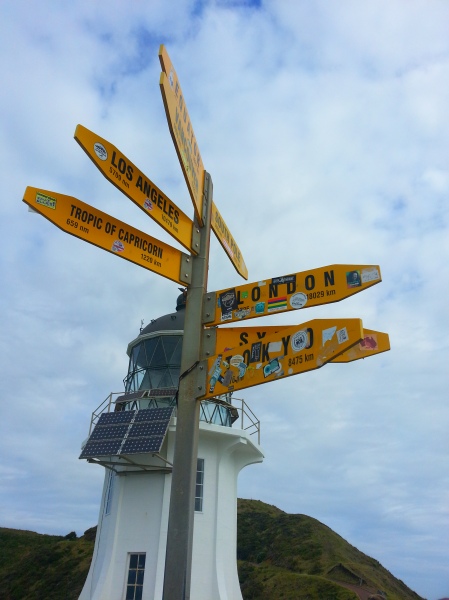 But the Ninety Mile Beach actually turns out to be very beautiful. We walk it for three days, and we camp in the sand dunes in the evenings. We observe the behaviours of the gulls as they fly up in the air and drop shellfish onto the ground in an attempt to break their shells. We watch cormorants and oystercatchers, and I see so many sea creatures that I never even knew existed. 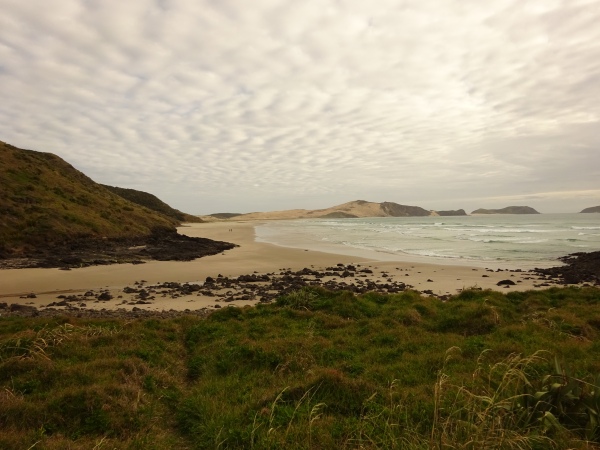 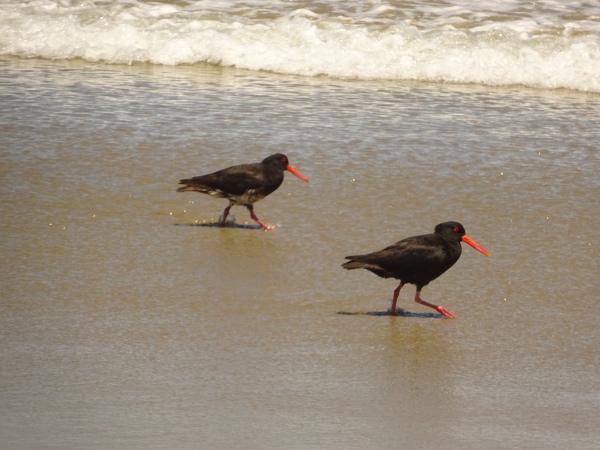 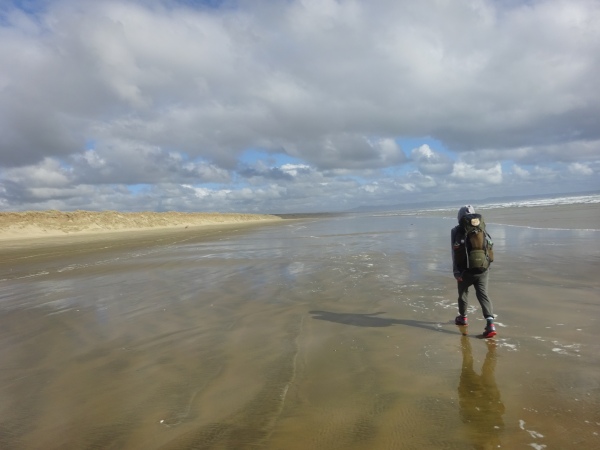 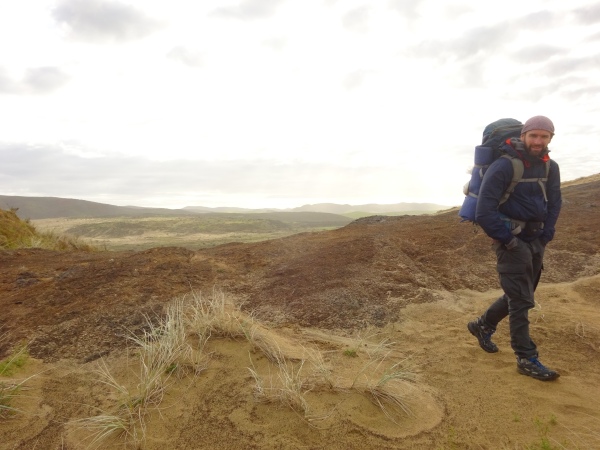 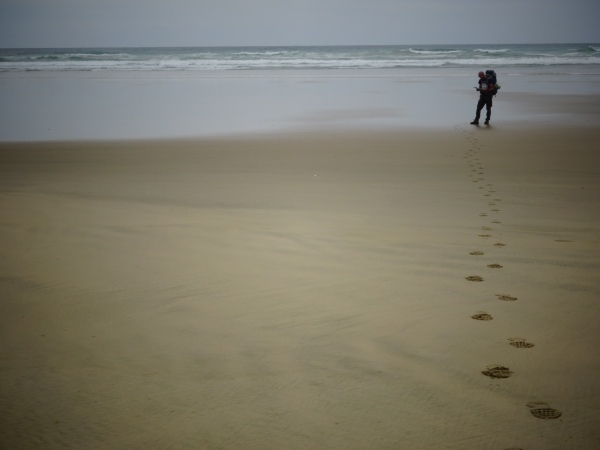 The beach plays tricks with my mind. In the far distance, birds look like people. We see no other hikers for miles, although we see some footsteps on the beach. It is only when we speak to passing cyclists that we learn that there are at least ten hikers in front of us and ten behind us. 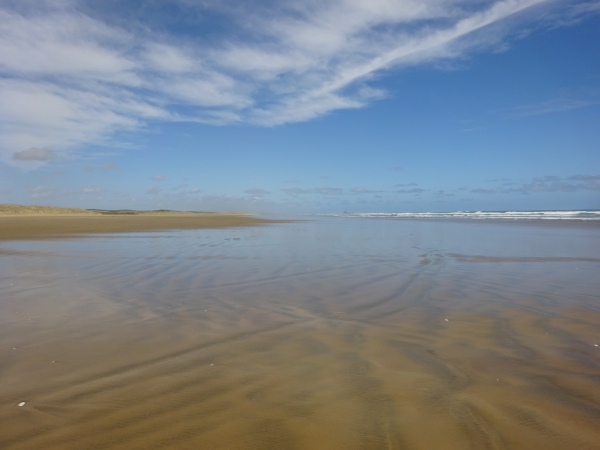 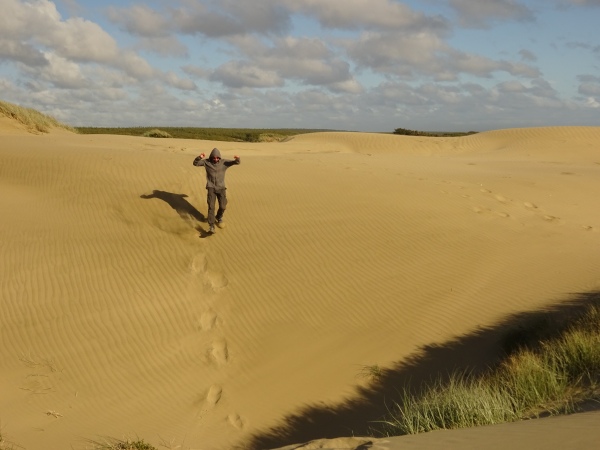 Running in the dunes 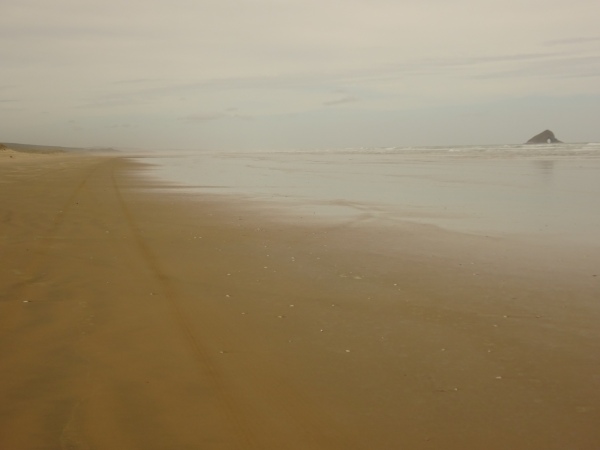 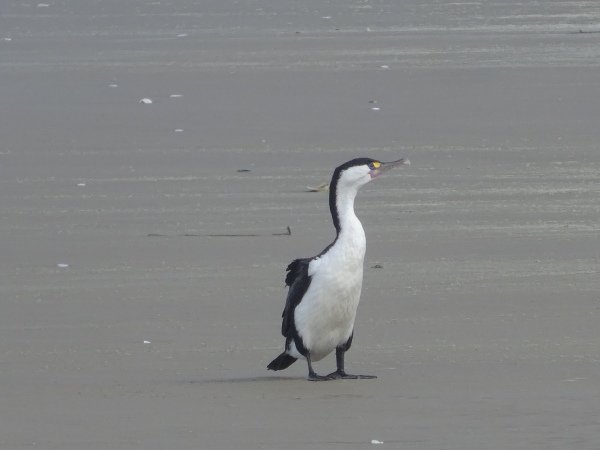 At the end of our fourth day we’ve already walked 100km. We rest in a lovely little village called Ahipara and meet lots of other hikers. I’m surprised by how popular this trail is. On my other trails in France and Turkey, most hikers have been people aged around fifty or sixty. But 90% of people on the Te Araroa seem to be in their early or mid-twenties. And a vast number of them are from the United States. These smiling, super-chatty, super-confident American hikers seem more competitive than European hikers and their presence here makes me feel like I’m on one of the great trails in the US that I’ve heard so much about.

Hiking has changed. People no longer rely on good, old-fashioned maps. They have phone Apps to tell them where water sources and camping spots are located, and GPS to guide the way. Whilst wild camping on the trail, people are checking the Te Araroa Facebook page and updating their statuses. And they now know exactly where other hikers are on the route. Both Chris and I have mostly chosen to opt out of this electronic world. We’re idealists, preferring not to fix our eyes on gadgets whilst in nature. But without Facebook and Apps, there’s a whole other informative, online world to this hike that we’re excluded from.

As we prepare to leave Ahipara for the next section of the trail, I feel a niggling twinge in my knee. Ignoring it, Chris and I start walking the Northland Forests. These forests have been talked about with dread and fear by hikers. They’re supposed to be very muddy and very difficult.

And they are! I quickly realise that I shouldn’t attempt to avoid the mud – there’s just too much of it. Shoes quickly disappear into murky, sticky brown puddles. The first forest, Herekino, is magical. The trees are like nothing I have seen anywhere – there are ferns and palms and kauris. And the birds! Such amazing birds! 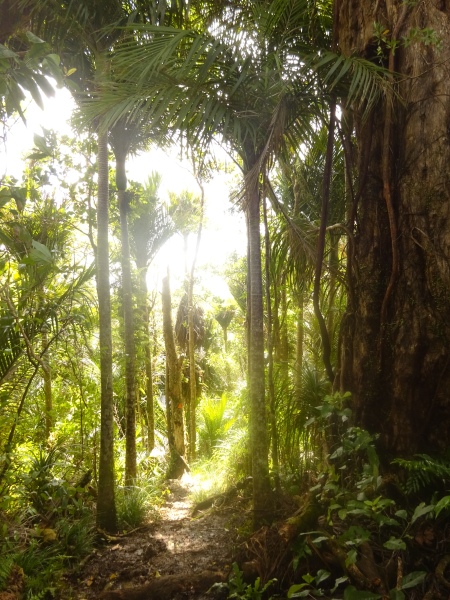 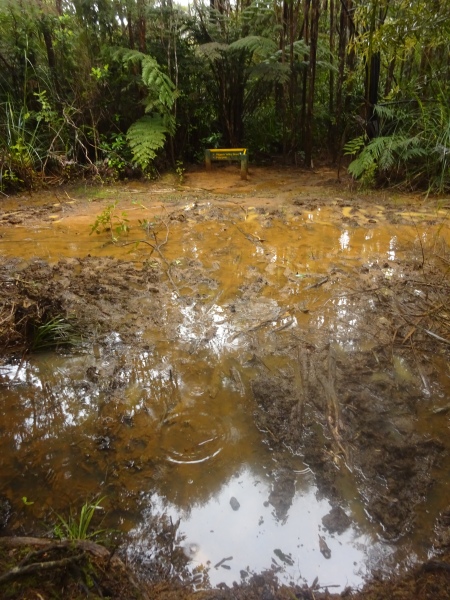 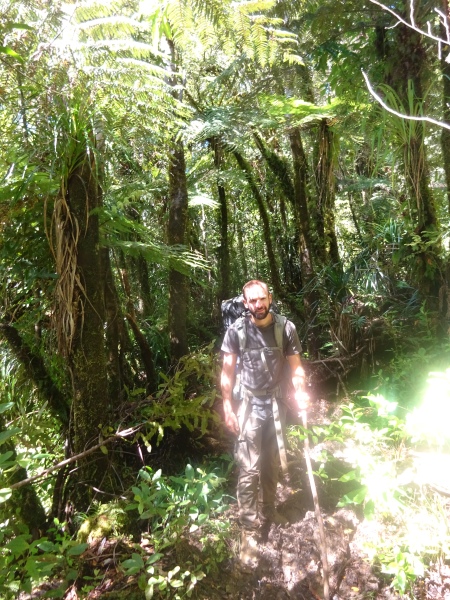 Chris in the enchanting but muddy forest 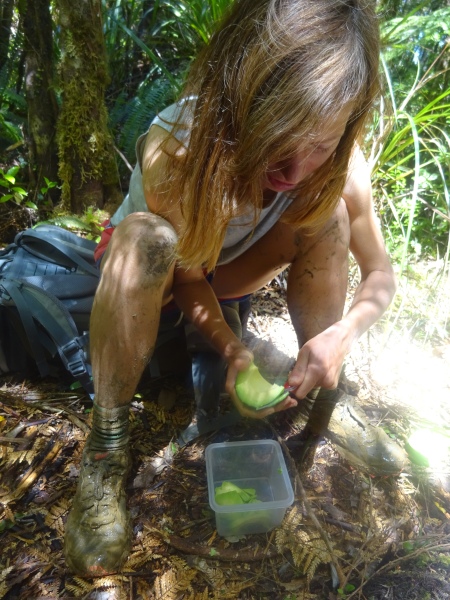 Avocado lunch! Me and Chris eat well on the trail…no instant noodles for us!

By the end of the first forest I’m in pain. The niggle in my knee didn’t disappear, but has instead grown worse. Despite this, we continue into the second forest – Raetea – the most dreaded of the Northland forests that we’ll cross.

Raetea forest is more steep and even more muddy than the first forest. We walk at a grand speed of 1km per hour as we squelch up and down the ‘trail’, which at times isn’t a trail, but is more of a scramble through dense foliage. 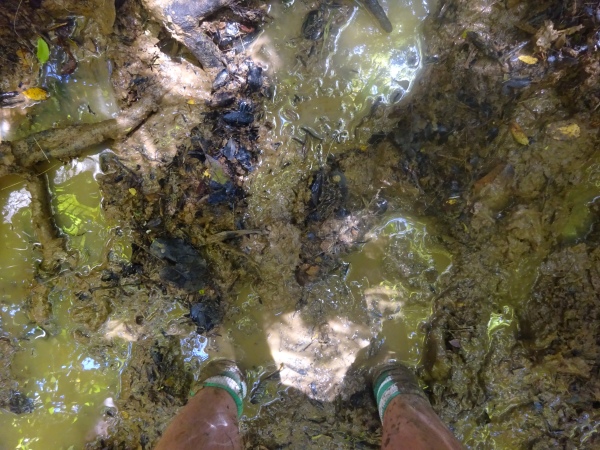 The state of the trail in the first two forests…can you see my feet?! 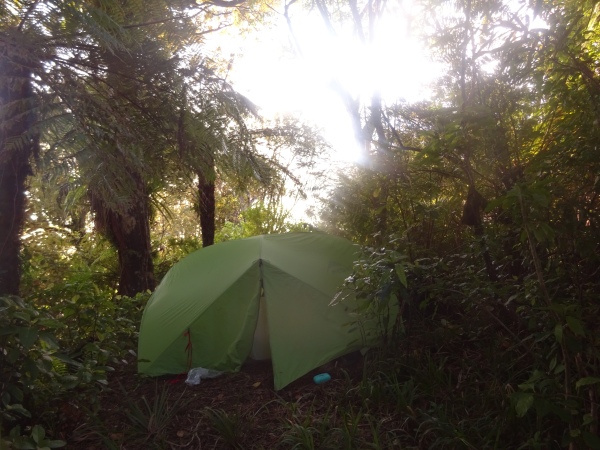 You won’t find a camping spot more beautiful than this

I’m in excrutiating pain for the last six kilometres of the Raetea forest. I can’t bend my knee and I can barely walk. I strap up my knee and hobble with a walking stick (which fondly reminds me of my childhood, when I used to borrow my Grandad’s walking stick and fake-hobble around). 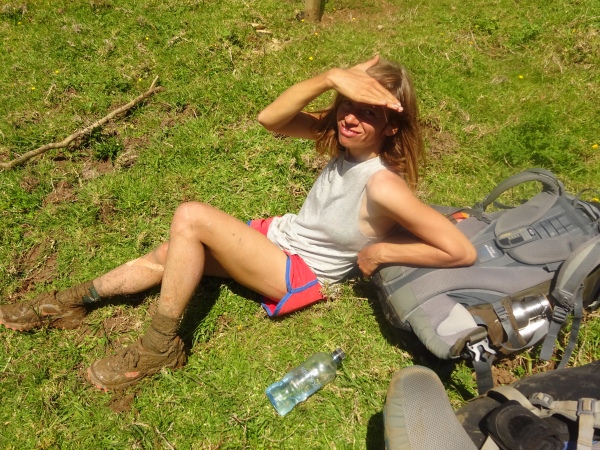 A look of relief: badly injured, I make it out of the Raetea forest!

After roughly 60km of walking with an injury, with tears of frustration I finally admit that I need to rest and let my body heal. So after just 160km of the Te Araroa, we temporarily leave the trail and stay in a hostel, where I put my faith in nature, filling my diet with turmeric, ginger and fresh, leafy vegetables.

It’s frustrating, waiting to get better and not knowing how long it might take. Chris, who’s perfectly healthy, patiently waits with me. I try to let go of the disappointment; let go of the longing to be on the trail; let go of the friends we have made on the trail, who will be long gone by the time I recover. All I can do is ice my knee and wait.

Afterword: Hours after publishing this, I found out about the massive earthquake on the south island. Way up in the north, we felt nothing. My thoughts are with the people who have been affected by the earthquake, especially those in Kaikoura. 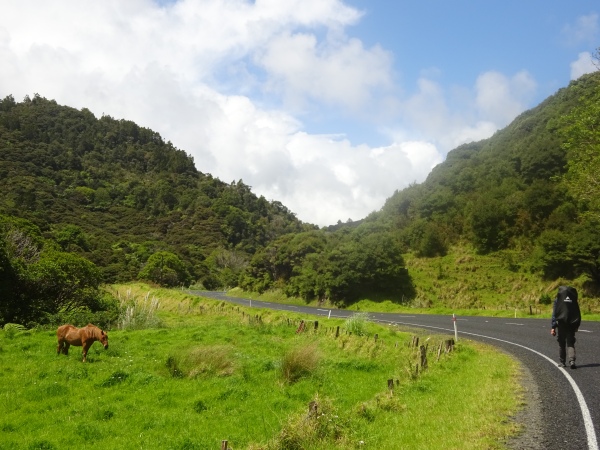 Thoughts on gear (only of interest to hikers):

I feel that the extortionate amount of money spent on outdoor gear is just another aspect of consumer capitalism, making big corporations money whilst polluting the world. I never cease to find it ironic that those of us who claim to love the outdoors buy some of the most toxic products on the market (myself included). These products leech chemicals into the rivers.

I don’t particularly rate any of the outdoor brands that I use, due to their company ethics. The only notable exception to this is my Grayl water filter bottle. By using it, I have no need to use (and discard) mineral water bottles, and it gives me safe drinking water, wherever I filter.

If I don’t think it’s a necessity, I won’t swap regular clothes for a hiking ‘uniform’. “You don’t look like hikers! You’re wearing normal clothes!” a fellow hiker says to Chris and I. My secondhand pair of shorts from the 1980s, which I picked up in a market in Indonesia, work just well as shorts bought in an outdoor store. People have hiked for centuries without the need for petro-chemical expensive outdoor gear. (Yes, I appreciate the need for the correct layers, but I’m not embarking on a K2 expedition just yet!) Having said this, I do have a good quality (and expensive) tent, sleeping bag, rain jacket and trail shoes. These all make my hike much more comfortable.

I have spent hours researching which outdoor brands are the most ethical with regards to the toxic chemicals they use, labour standards in their factories, and the abuse of animals.

Much of the information about the ethics of the big companies is contradictory (i.e. Patagonia is known as an ethical company but is bottom of the list with regards to toxic PFCs used).

If I could buy my outdoor gear again, I would try to buy more ethically. Outdoor brands that seem to be more ethical are: 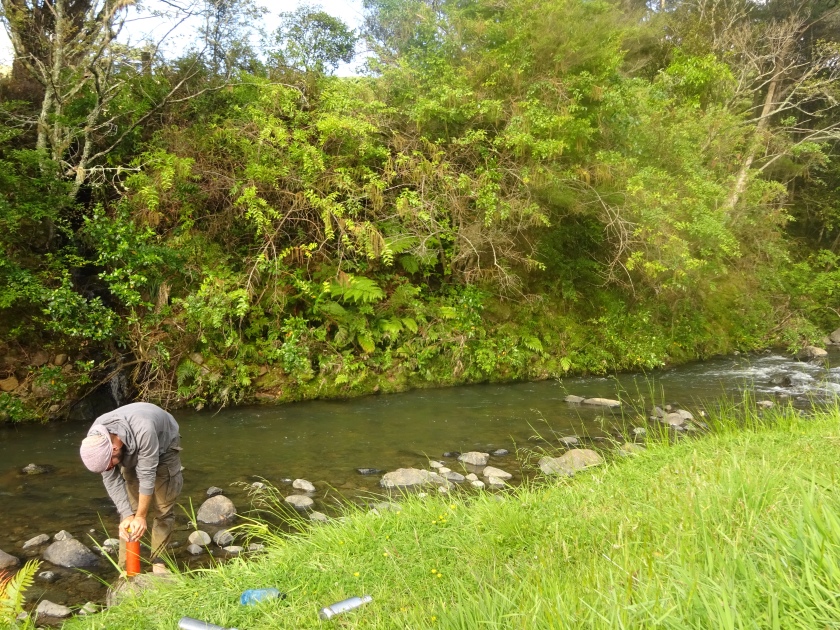 You can read Greenpeace’s report on PFCs here http://m.greenpeace.org/international/en/high/publications/Campaign-reports/Toxics-reports/Leaving-Traces/

Check out the ethical rankings for various brands on these sites: