This blog post covers the first 230km of the Te Araroa on the south island: the Queen Charlotte Track, the Pelorus river trail and the Richmond Ranges. You can also read part 1 of the trail.

“This is not a trail,” I splutter at Chris breathlessly as I huff and puff my way up, terrified of falling. “It’s a scramble up a cliff face.“

We’re back on the trail! After a two month knee injury (which still hasn’t fully recovered) Chris and I rejoin the Te Araroa at the start of New Zealand’s south island.

The trail begins on the Queen Charlotte Track in the Marlborough Sounds. We don’t even glance at the monument commemorating Captain Cook’s landing here, which enabled the colonisation of Aotearoa. Why would we want to honour the British Empire’s colonialism and the repression and deaths of the Maori inhabitants?

Right from the start of this relatively easy section I think, “This is so much more beautiful than anywhere on the north island.” The hills are heavily forested and the turquoise sea laps against shores which are barely inhabited by humans.

Views from the Queen Charlotte Track 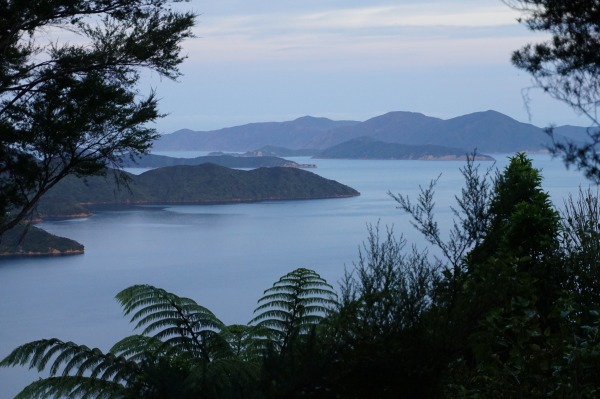 Given the Department of Conservation’s obsession with using poison (see last blog post) it comes as no surprise to me that DoC is injecting poison (yes, injecting poison!) into the pine trees here. It is also unsurprising that this trail is littered with animal traps every five metres.

Wekas are flightless birds that are all over the trail. They are very tame and wait for food scraps or attempt to go into tents. Wekas actually kill rats and other rodents themselves.

After three and a half days of hiking in stunning terrain, we finish this section of the trail and walk to the next sections – the Pelorus River Track and the Richmond Ranges.

Chris and I are slow hikers. Therefore we need to pack twelve days of food into our rucksacks for these next two sections in the mountains. This is a massive feat for two vegans who like to eat healthily and who don’t want to survive on instant ramen noodles. (I often wonder to myself what kinds of foods other vegans – or those who want to eat well – take on trail with them, as most other people seem to live on instant noodles.)

Walking a road section with our new friends Elise and Luc

After a thirteen kilometre road walk, we arrive at the Pelorus River Track. Due to a storm the previous day, whole trees have fallen onto the trail, and some of the way is barely passable.

The trail, which sidles above the river, is full of entangled tree roots, making hiking slow-going.

Climbing up up up as we stumble over tree roots

The Pelorus river. This is where the crew of The Hobbit filmed the scene where the dwarves float down the river in barrels

“CHRIS!!” I scream suddenly as I hear my hiking companion fall off of the narrow path and disappear down a steep drop.

“I’m ok!” Chris calls back, out of sight. “The ferns cushioned me!”

We cross lots of shaky swing bridges which look like they have been made by young kids for their school homework. 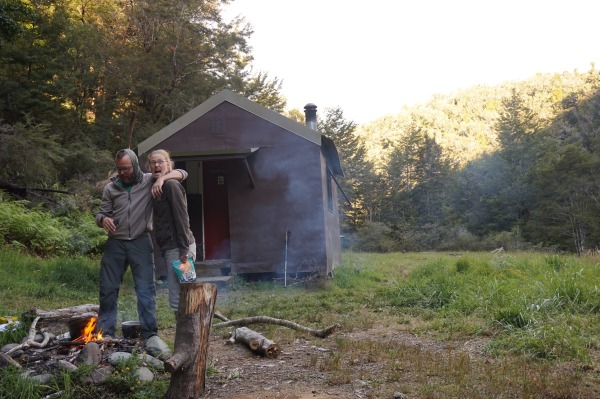 Elise and Luc at our resting place for the night: Captain’s Creek hut

“I’m not getting out of my sleeping bag in the freezing cold to climb a mountain,” I moan at Chris sleepily one morning. “I’m staying in bed!”

We are in the Richmond Ranges, which consist of some of the toughest hiking days of the whole Te Araroa. Like all other hikers, we walk from hut to hut through these mountains, and it’s in this section that we realise just how popular the Te Araroa is. Sleeping huts are usually too full (most having only six beds). Getting a bed is literally down to survival of the fittest, and we usually camp instead.

Most people that we meet are from the US. It’s usually (but not always) the hikers from the US who are the fastest and covering the longest distances in one day. They shoot past Chris and I as we try to catch our breaths, or as we take one of our numerous breaks and tuck into our snacks.

Camping at Top Wairoa..beautiful! (Although the nights get very, very cold up here)

Purifying our water (we’re using the Grayl purifier). There’s a vomiting and diarrhea sickness which has spread amongst hikers in this region, so we filter all of our water!!

The official trail notes state that the Richmond Ranges’ trail is “unformed in places“. This becomes very apparent when the route becomes more of a rock climb without ropes, or when the path is so small (or so eroded) that one tiny error would result in falling into the abyss (or at least a good few metres).

I have vertigo, but there’s no place for that on the Richmond Ranges. “You can do this,” I say to myself whenever I freeze in terror, and I manage to swallow my fear and continue on.

The trail is often over loose scree or on boulders which wobble with our weight.

Chris climbs the scree on the way up to Mount Rintoul

The trail. You can just about see another hiker in the distance

The path is much smaller than it looks and the mountain is much higher! 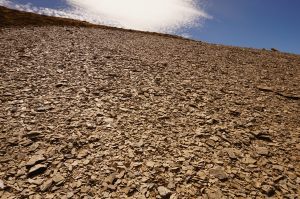 The way over loose scree 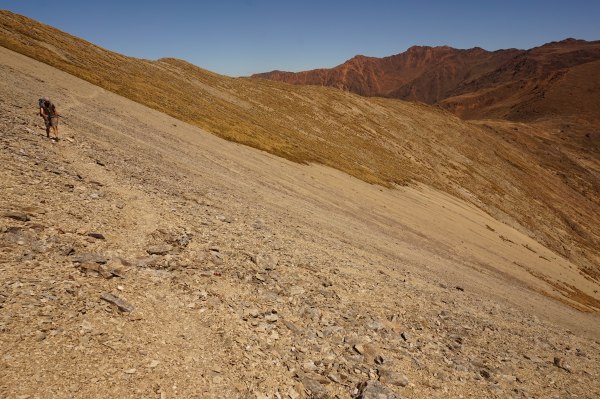 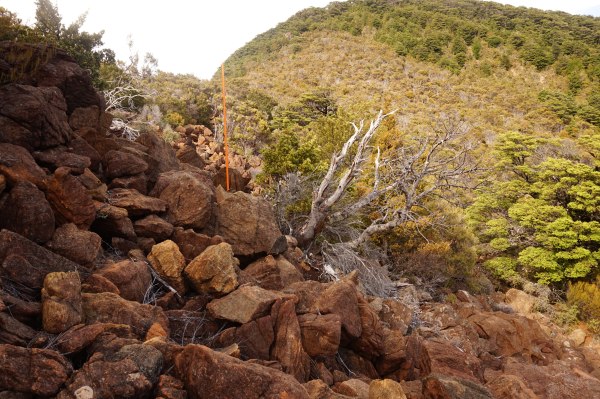 The trail consists of loose rocks which make me swear a lot!

This section of the trail also has many river crossings. The small but fast flowing Wairoa river terrifies me with my lack of river-crossing experience. The trail even crosses the river right above a small but potentially very dangerous waterfall!

“The Wairoa river is the most beautiful river I’ve ever seen,” says Chris 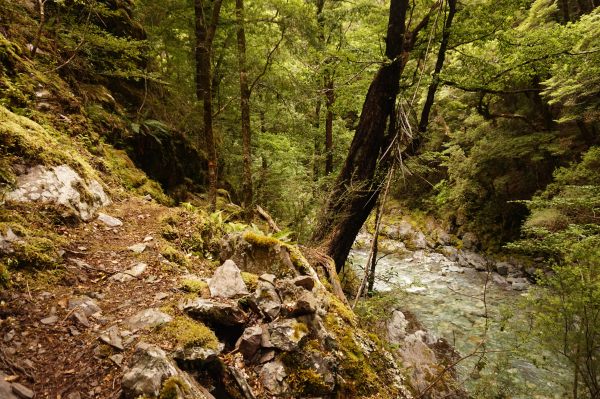 But despite its difficulty, the Richmond Ranges section awards us with stunning views and the most incredible mossy enchanted forests. If possible, it’s worth waiting at the huts for bad weather to clear (the weather up in the mountains is really unpredictable) to get the best views. We were fortunate enough to have the food to do this. 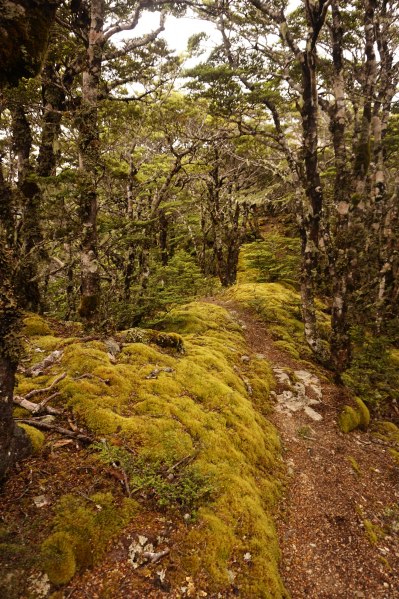 Chris in the enchanted wood 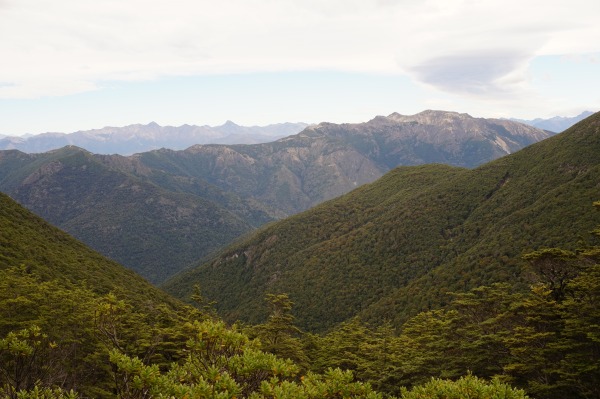 The views from the trail aren’t too bad…! 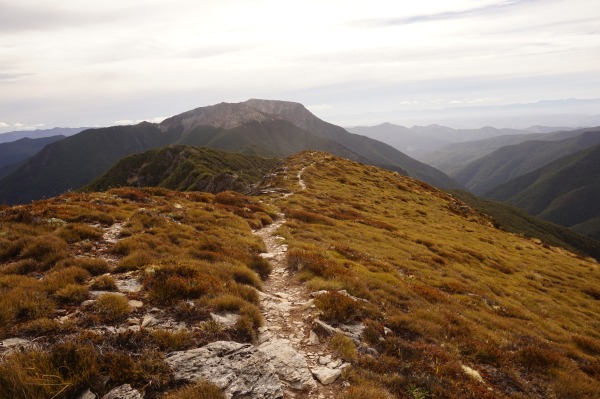 Chris and I are proof that you don’t need to be an amazingly competent and confident thru-hiker to walk this section, nor do you have to be super lightweight in the gear and food you carry. We took longer than most, but we did it!