This blog post covers the following sections of the trail on the south island:

It’s raining. The river hurls water downstream and the track becomes part of the river. We huddle in hikers’ huts until the weather clears.

And then, when the sun comes out and we start to climb away from the valley, the Waiau Pass section becomes spectacular. If you’re choosing just a few sections of the Te Araroa, pick this one! Snow-capped mountains surround us as we climb higher.

We walk in a fairytale land of cascading waterfalls, mossy forests, sparkling rivers and bright green, grassy riverbanks and arrive at the most magical lake in the world – Rotomairewhenua (meaning Lake of the Peaceful Lands) – sacred to the Ngāti Apa Māori people. Rotomairewhenua is better known as the Blue Lake. We take half a day off here, camping by the lake. How lucky we are to be here.

The trail continues to amaze me as we pass Rotopōhuerua (the colonial name is Lake Constance).

And then I begin to swear under my breath as the track becomes, in typical Te Araroa style, more of a mountaineering expedition than a hike. We climb almost vertically up the never-ending scree slope to Waiau Pass, and then descend precariously down the other side, clambering over huge boulders. 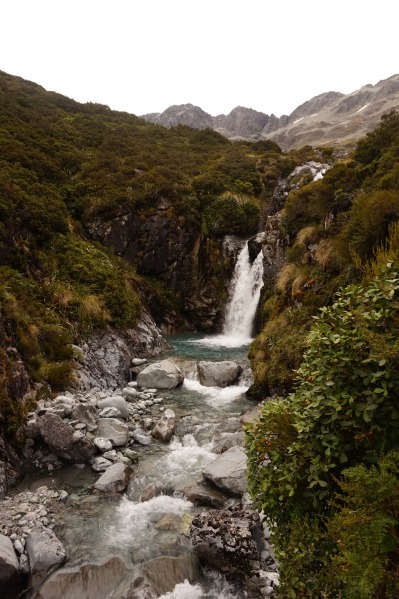 And then the weather changes again when we arrive down in the valley and we hike through wet grass in the mist and rain.

I almost get swept away when crossing the deceptively strong Ada river, which is a “straightforward crossing” according to the Te Araroa trail notes. As I wail and tremble in Chris’s arms, safely on the other side of the river, we vow to cross rivers linked together in the future. Luckily, we have already been taught   how to do this effectively by Kiwi friends.

We’ve now walked over 600km of the Te Araroa! Okay, so it’s not the 2000km we were hoping to have hiked by now, but I’m so grateful that my knee injury has healed so well…we really didn’t think we would get this far.

I’ve been dreading this section of the Te Araroa ever since someone said to me:

“If you think that the Richmond Range has a lot of river crossings, wait til you get to Arthur’s Pass!”

In reality, the first four days of this track are some of the easiest of the Te Araroa. The trail goes through flat cow-grazing valleys and beech forests.

We’re lucky enough to be joined by our friend Quinoa for five days of this section. Quinoa embraces the long days of hiking, enjoying the physical challenge, bounding along like a gazelle.

For the first few days we run into lots of hunters. Chris debates with one hunter who kills deer as “trophies”. He says that he leaves the animals he kills in the bush because his wife doesn’t like ‘game’ meat. He admits that instead he buys meat from the supermarket. “Fuck you,” he says when Chris tells him that he’d prefer it if no animals were killed.

As well as lots of hunters, there are sandflies by the thousands in this section. When it promotes tourism, the New Zealand government never mentions these tiny flies who live everywhere and who make me itch and scratch for weeks. My legs look like I have chicken pox.

As usual, there are dodgy, rusting, bouncy swingbridges crossing rivers and creeks.

We visit many different hikers’ huts, ranging from luxurious cabins to old sheds!

After a couple of days, we come to one of the Te Araroa highlights: hotsprings in the forest! Chris and Quinoa spend hours in the super-hot water: it’s just like being in a bath, surrounded by trees and birds! (I’m not uploading my photos of the hotspring due to Quinoa and Chris’s nakedness!)

But what makes this section so special is the birds, especially the most friendly bird in the world: the South Island Robin. These robins fly down and greet us on the trail and hop onto our belongings.

Of course, before long the track becomes more typical of the Te Araroa: steep, with parts of the trail having caved in. There are numerous river crossings and the way becomes difficult to follow. Quinoa leaves us at this point to go and find a mountain hut to write in solitude.

Chris and I link together to cross the surprisingly strong Otehake river, where the water reaches the top of my thighs. I am in awe of hikers who walk the Te Araroa solo. At only five feet tall and about 47kg, I don’t know how I would get through these rivers, which at first glance seem harmless, if I were hiking alone.

We reach the last part of the section – the part that I have been worried about: the Deception River track.  It runs straight through a gorge, along the riverbed and over boulders, with many river crossings.

The Deception. Who wouldn’t be slightly unnerved by a river with that name? Last week, two hikers had told us how the waters of the Deception had reached the top of their thighs. These two men are at least a foot taller than me. Shit.

But Mother Earth has blessed us with over a week of sunshine, and the water levels of the Deception are very low. Our first crossing is the most sketchy, but Chris and I link together and cross without a problem. The Deception route becomes beautiful, and even enjoyable, as blue water cascades over rocks and down the valley.

After finishing this section, I’m sad to learn that just two months ago a woman named Isabel died whilst trying to hike up this river in fuller waters. She was a few years younger than me, at only thirty-two years old.

Once again, we’re blessed with beautiful weather for this short section as we spend the next couple the of days traipsing through the Harper river. None of the numerous river crossings come above my knees.

The terrain transforms. Gone are the deep greens. “You’re in dry country now,” a man informs us as we hitchhike off the trail to the town of Methven to resupply our food. I’ll believe that when I see it, I say to myself, thinking of all the river crossings that lie ahead for us. My feet have been wet every single day of this trail. I don’t imagine that changing any time soon…

3 thoughts on “Hiking the Te Araroa in New Zealand: part 3”