I have been walking the Te Araroa hiking trail in New Zealand. This post covers the section between Lake Tekapo and Lake Ohau. After this we decided to quit the Te Araroa two-thirds of the way down the south island. Below I talk about our reasons why we quit, and I reflect on my time on the Te Araroa and whether it was a good hike to do.

Lake Pukaki, which is just beyond Lake Tekapo, is one of the most stunning areas of the Te Araroa. Maybe it’s the most stunning. The lake faces Aoraki, the biggest mountain in Aotearoa (New Zealand). Pukaki was the setting for Lake Town in The Hobbit. It’s surrounded by roads, so – like with many places in Aotearoa – it isn’t quite as remote as it looks in the photos. The free campsite is idyllically placed and is full of happy young Europeans in campervans, having the time of their lives on road trips.

The walk from Pukaki to the small town of Twizel is along a cycle path, passing through pine forestry areas and bare brown fields. The sun beats down on us  and I feel like I’m going to pass out from sunstroke.

We continue onwards on the Te Aroroa, walking 25km on farm tracks in the beating sun to Lake Ohau. We pass animal trap after animal trap, and see a dead bird and a dead cat caught in them.

“Traps in New Zealand supposedly protect native birdlife and native forest,” says Chris. “But there’s a hydro-electric power plant on one side of us, and cattle fields on the other side! Is it really the other non-native animals who have fucked up this native habitat? Or is it humans?!” 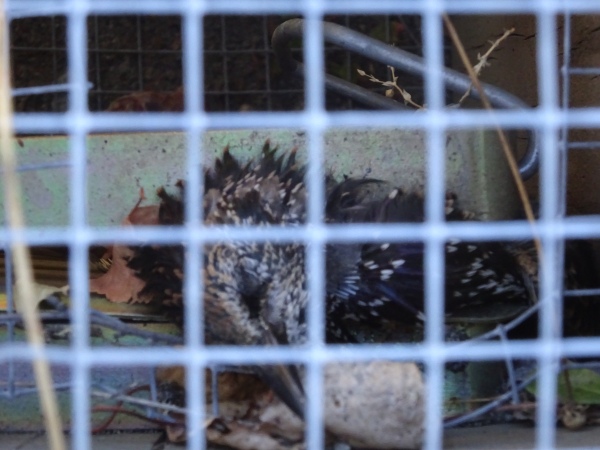 A dead bird in one of the traps

Beautiful Lake Ohau is dammed – like many of the lakes we have come across. But I start to feel like we’re in the wilderness, even though there’s a road nearby. We camp and cook at the lake shore.

The next day we continue onwards up more farm tracks and camp somewhere by the forest between Lake Ohau and the Ahuriri river. I wake up the following morning with knee pain. Before, I had to quit the Te Araroa for two months because of knee problems, so I’m gutted to have yet more pain.

Chris and I make the decision to hike back down to Lake Ohau and have a few days’ break from the Te Araroa and give my knees a rest.

However, once off the trail, we discuss whether to quit the Te Araroa permanently. We’ve been in Aotearoa (New Zealand) for over five months, and we can only legally be in the country for a total of six months. There are many other hikes that we want to do in the country, so we need to decide: do we complete the Te Araroa for the sake of completing it, or do we spend our remaining time exploring the other trails that have been recommended to us?

“You’ve already done the best bits!” our friends Elize and Luc text us when I ask them whether we’d be missing out if we quit the trail. They’re about a week ahead of us, and have almost finished walking the Te Araroa.

That decides it: we quit the Te Araroa two-thirds of the way down the south island.

Reflections on the Te Araroa

Since coming off of the Te Araroa, I have thought about whether I would recommend this trail to others. I also asked other hikers what they thought.

Before I came to New Zealand, when imagining hiking in here, I was fooled by the camera shots in films (such as Lord of the Rings) that are based here. I thought I’d be walking through mountain wilderness, surrounded by snowy peaks as far as the eye could see. In reality, it wasn’t like that! New Zealand is a small country with a lot of farming. Even though we sometimes walked for a week without seeing a village, I never really felt like I was in the wilderness. Often we hiked through big farming stations, or on roads, or we saw snowy mountains in the distance, but didn’t quite reach them.

Since quitting the Te Araroa, we have walked some absolutely stunning routes – a million times better than much of the Te Araroa. So, if I could re-live my six months again in this country, I wouldn’t choose the Te Araroa. There are walks on the south island that can be linked up to make an amazing long distance trail…I will write about them in my next blog post.

However, hiking the Te Araroa was rewarding most of the time. And I learnt some valuable hiking skills, the most useful of which was river crossing skills. We crossed so many rivers and creeks, and had wet feet for most of the south island. I now feel much more capable of crossing rivers, or judging when I need support from others to cross. I will carry this experience with me as I hike in other parts of the world.

I asked my hiking partner, Chris, whether he was happy that he had hiked the Te Araroa. He replied:

“It was really great to spend long periods of time in nature and not to come to a village for several days. For example, on the Richmond Ranges we were in nature for about ten days before we came to the next place where people were living. I hadn’t spent that long in nature before, so that experience was really valuable. I got lots of experience from river crossings, too.

It was often great to meet other Te Araroa hikers, but at other times it was frustrating, as people often saw the hike as a sport, trying to go as fast as possible, whereas we were there to be in nature.

I’d recommend that people pick and choose sections of the Te Araroa. On the south island I’d recommend walking from the Queen Charlotte Track at the top of the south island and finish at the end of the Two Thumb track. But after that, I think there are better areas in New Zealand where people could hike. I would also advise people to skip all of the road sections. If people have less time in New Zealand, I would say to pick a few sections: I’d recommend the Waiau Pass, the Queen Charlotte Track and the Richmond Ranges. On the north island, I think the Northland forests were special – like nowhere else you’ll see in the world. I also thought that the Tongariro Crossing was great.

But make sure you save loads of time for Fiordland and the Mount Aspiring National Park. These were the most stunning places we walked in, and they’re not on the trail. You could spend months exploring them.

New Zealand was really, really expensive – especially for food – so people should think about that when they’re planning a trip. It’s much more expensive than most of Europe. People should also make sure that they buy all of their hiking gear before they come. (And bear in mind that you’ll probably get through more than one pair of hiking shoes).

Hiking the Te Araroa, a lot of the time you’re walking amongst animal traps and signs telling you that poison has been laid. One time we couldn’t even walk a section because a helicopter was spraying poison onto the land. On the one hand you can walk for ten days and feel like you’re in wilderness, whilst on the other hand you’re being subjected to synthetic poisons which are being sprayed onto the land. As well as causing massive harm to animals, I think it should be a consideration for hikers: for the safety of the water that people are drinking and for your health when being exposed to these poisons.”

After we’d quit the hike, we ran into two people who had walked the whole trail, Oli and Jess. I asked them the same question – would they recommend the Te Araroa? Oli replied:

“When I completed the TA I recommended it to everyone I talked to! It was a great experience. But then I started to explore and hike other amazing areas in New Zealand which were much better than the TA so I’m not so sure that I’d recommend it now.”

Jess agreed, and told us that she would recommend that people “pick sections of the TA.”

The Te Araroa currently has a lot of road sections. This will change over the coming years, as access to private land is negotiated. Because of my knee injury, we skipped most of the north island’s road sections, but we were told about one section that was 130km on roads! This disappointed some hikers.

When we were hiking in the south island, we ran into a guy called Will, who had started the Te Araroa on the same date as us back in November. I asked him how his hike was going. He seemed a bit jaded by the road sections.

“It’s different to what I was expecting,” he said.
“You’re not enjoying it?” I asked.
“It’s just different.”

A lot of amazing people have worked hard to make the Te Araroa possible, and despite my frustrations with the trail, I’m very grateful to everyone that made it possible for me to thru-hike across New Zealand.

2 thoughts on “Hiking the Te Araroa Part 5: Reflections on the hike”