I’m always a little bit nervous when hitchhiking in a new country, especially where there’s a language barrier. But Japan is great to hitchhike! People know the concept (pronouncing it ‘hitch hike’, emphasising the space between the two syallables). We also saw some Japanese hitchhikers.

To hitchhike, you do the same as you would in western Europe, and stand with your thumb out. Sometimes we used a sign, sometimes we didn’t.

Waiting times were similar to in Europe, ranging from three minutes to three hours.

Hitchhiking at the exit of a rest area. We have a sign which may or may not say ‘west’!

Rest areas on the smaller roads are called michinoekis (pronounced michi-no -eki). The michinoeki is a great place, often providing free green tea, and sometimes even an onsen or sento (hot spring or bath). It is also a great place to stand to hitchhike.

Throughout our time in Japan, we mostly hitchhiked from rest area to rest area.

If we were on the edge of a town and needed to get to the motorway, we stood with our thumbs out. When a car stopped, we asked drivers to take us to the interchange, or IC (which is what the Japanese call the junction onto the motorway). Our longest waiting times were when we were hitchhiking onto the motorways.

We quickly found that there is no need to buy a detailed atlas of Japan because the Service Areas, Parking Areas and Michinoekis all provide great free maps of the region you’re in. You can find these maps in the free magazines in all of the rest areas. These maps also show where the next Service Area or Parking Area is, so they’re really handy to show your drivers to decide where they will take you.

Of course, these free maps are in Japanese characters only, so you need to translate the major cities on the map so that you know where you are!!

We had already bought a bilingual map of Japan in Tokyo, but this wasn’t detailed at all. It helped us to translate the Japanese characters on the free maps, though.

Before coming to Japan, we had read that we could urban camp everywhere. As poor travellers, we really needed to do this! I have urban camped/free camped in many different places, but I usually hide myself in trees. In Japan, we didn’t need to hide ourselves. We camped behind Service Areas, at the side of the road, at waterfalls, in public parks. However, we weren’t as blatant as this person, who camped in a kids’ play area, and we usually waited til dark to set up the tent.

People often saw us in the mornings, but there were never any problems. We were only asked to move once, when we had pitched our tent in a car parking area in the dark! The parking attendant asked us to move on the next morning at 5.30am, but he was very nice to us.

Camping behind the michinoeki (rest area). The path in the photo is a well used cycle path. People saw us in the morning but no-one seemed bothered by us. 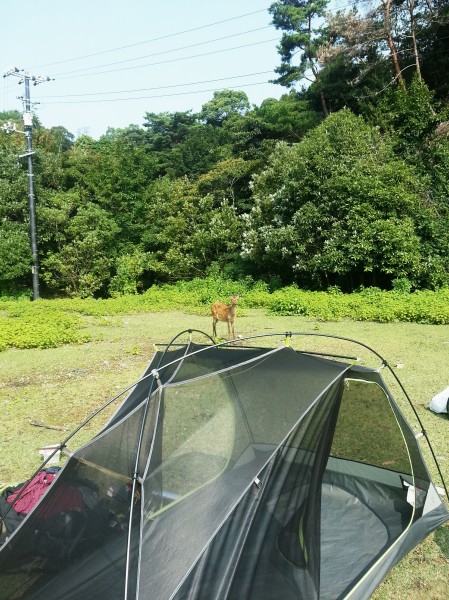 Camping on a patch of grass in Miyajima (sorry, deer!) 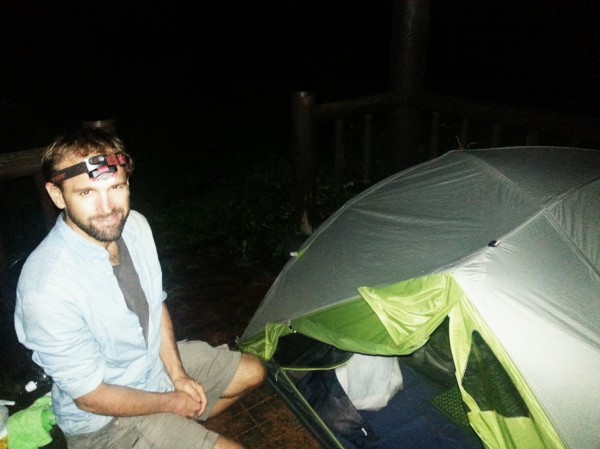 If you look carefully at this photo you’ll see that we’re camping on tiles. This is in a picnic shelter at the start of the Dewa Sanzan hike.

Japan’s a great country to wild camp and hitchhike. If I were to do it again, I’d make sure that I bought a Japanese SIM card with data. This is because I would have loved to use a translator app to communicate with people. Most people we met didn’t speak much English, or were very shy at using their English. If we had bought a Japanese phrase book, this would also have helped us a lot.

We encountered so much kindness in Japan, and people always drove out of their way for us. Some people even detoured one or two hours. We were often given gifts, food and drink.

Here are just some of our hitchhiking companions… 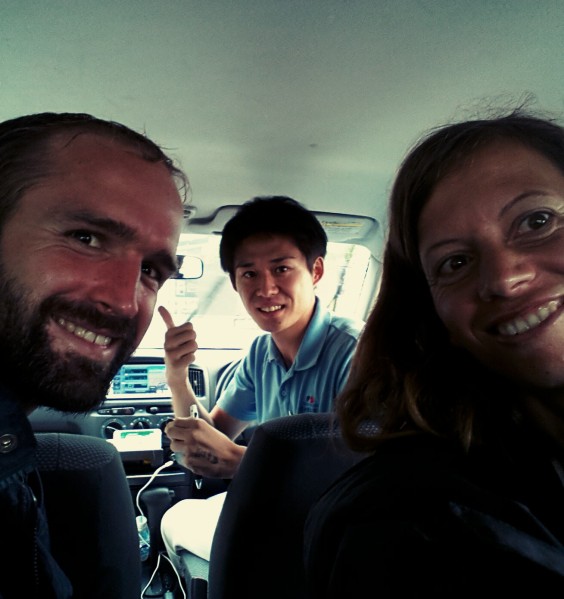 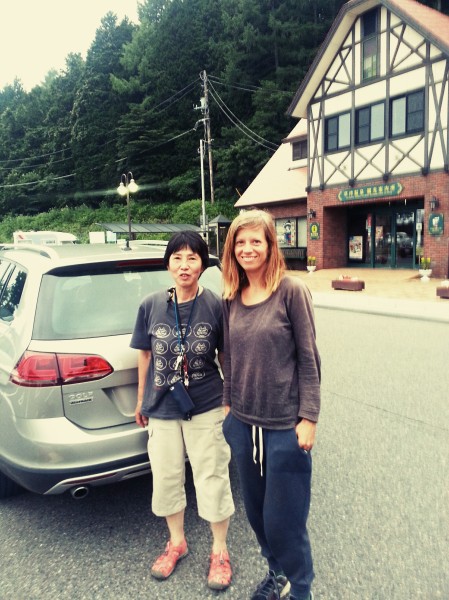 6 thoughts on “Hitchhiking Japan: some tips”