It’s night in the city of Hebron. Tear gas lingers in the air and my eyes sting. Hidden behind a curtain, I peer down at the group of soldiers. One looks up, scanning the windows. I quickly hide. Did he see me? He turns away.

The soldiers move a few steps, and then crouch down at a street corner. They wait, with their rifles ready to fire at people.

I hastily call my friends, giving them the exact location of the military. “Don’t come back to the apartment,” I say. “You’ll be shot.”

It is Nakba Day. Nakba means Catastrophe in Arabic. Every year, Palestinians protest on the streets, marking the anniversary of the period when they were ethnically cleansed from their lands. In 1948, roughly 700,000 Palestinian people were forced from their lands by Zionist militias. Hundreds of villages were depopulated and destroyed when the state of Israel was created.

Today, there are millions of Palestinians and their descendants still living as refugees, in Jordan, Lebanon, Syria, the West Bank and, of course, in that open air prison that is Gaza. They want the right to return to their lands.

The Nakba continues to this day, with more and more land being taken by Israel to build illegal colonies inside the West Bank. Palestinian houses are bulldozed on a daily basis, while Bedouin villages are destroyed. 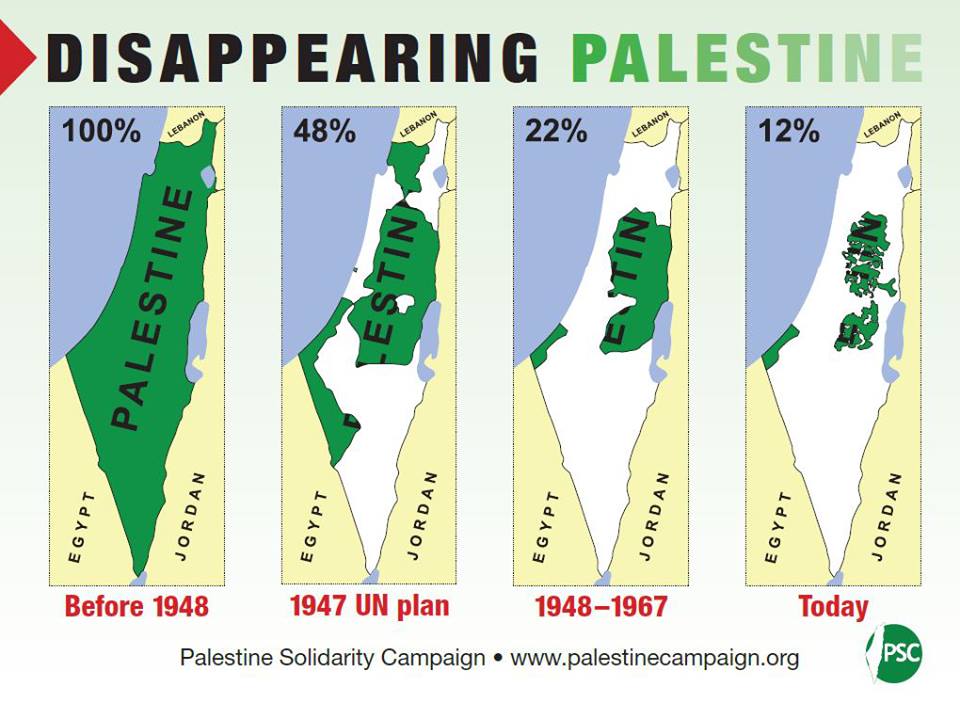 If you really want to understand what it’s like to live under occupation, I urge you to visit Hebron. Neighbourhoods have been divided by checkpoints, friends and family separated from each other. Whole streets have become apartheid streets – forbidden for many Palestinians.

Children and teachers can’t walk to school without being intimidated by soldiers. These same soldiers regularly shoot tear gas into the school playgrounds.

Can you imagine your children growing up in this environment?

A soldier has fired a metal tear gas canister just inches from my head, almost choking me. A warning shot, maybe. If the canister had hit me, it could have killed me.

And I have met Mahmoud. He was shot in the eye by an Israeli sniper in Gaza. The bullet went through his brain and out the top of his head. His father said part of Mahmoud’s brain was in his hands. Somehow, Mahmoud survived.

Despite all this, many people who go to Palestine fall in love with the place and return again and again.  In the face of such brutality, there is such courage among people in Palestine. When soldiers invade villages or raid houses in the night, Palestinian youths come out on the streets and fight back with the only weapons they have: stones, rocks and some burning tyres. They know that a stone is no match for a gun. A rock is no match for an armoured vehicle. But they risk their lives, anyway.

People here talk about steadfastness. They are determined not to be pushed from their last remaining lands. There is a saying: “to exist is to resist”.

Despite living under occupation, people manage to stay kind, generous and hopeful. If you visit Palestine, you will be invited in for tea, tea and more tea. And then you’ll be invited in at the next house for fizzy drinks and sugary biscuits. And you’ll be welcomed like you’re family.

So I urge you to go and see for yourself. But don’t tell the Israeli border guards of your intentions or they won’t let you in!

If you want to go to Palestine, consider joining the International Solidarity Movement or Jordan Valley Solidarity.

I visited Palestine one year ago. It’s taken me a while to write about it!

2 thoughts on “Experiences in Palestine”