Last Autumn I hiked the length of Scotland on the Scottish National Trail. Read part 1, part 2 and part 3.

Chris has joined me on the SNT, and I will no longer be hiking alone. He has picked the most beautiful area yet to begin his hike (section 20 of the official trail notes), a really lovely walk in the woods along the water’s edge, stopping for rest at the beautiful river bank. We warm up in the cafe in pretty but pretentious Blair Atholl with its working water mill.

It’s a dirt track up Glen Tilt (section 21 of the trail notes), and we camp at the lovely Tilt river with its rapids: a great camping spot. 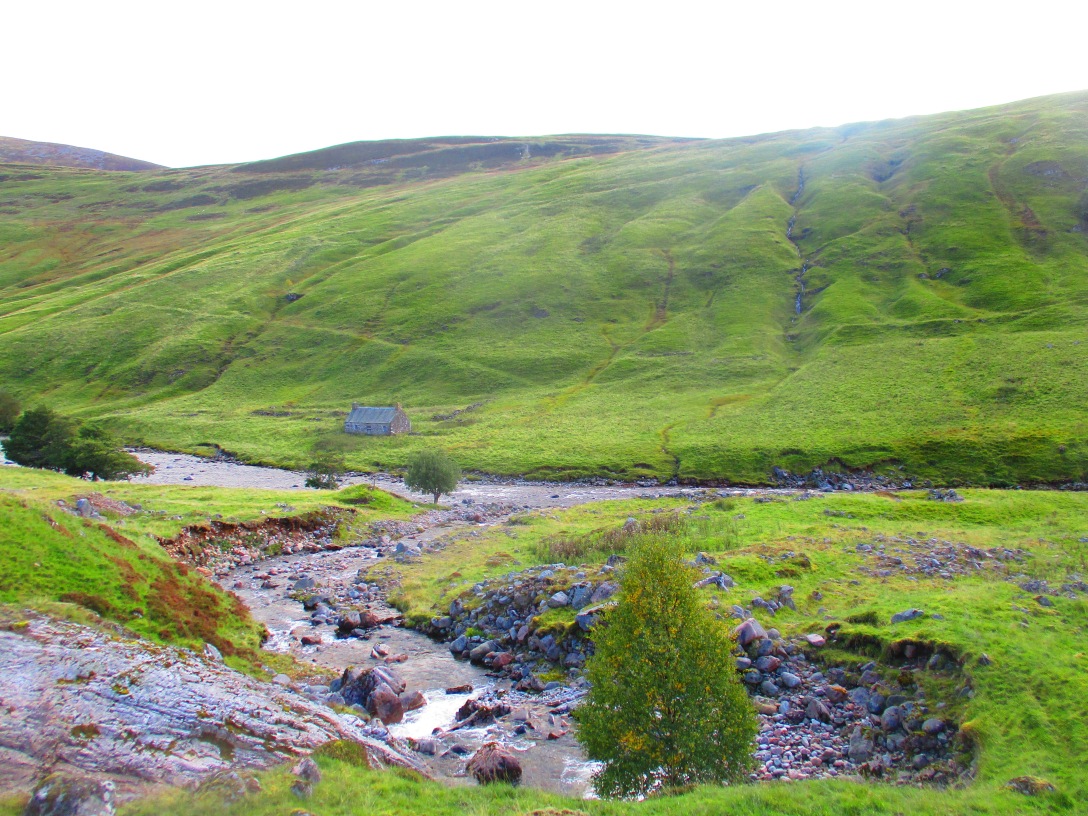 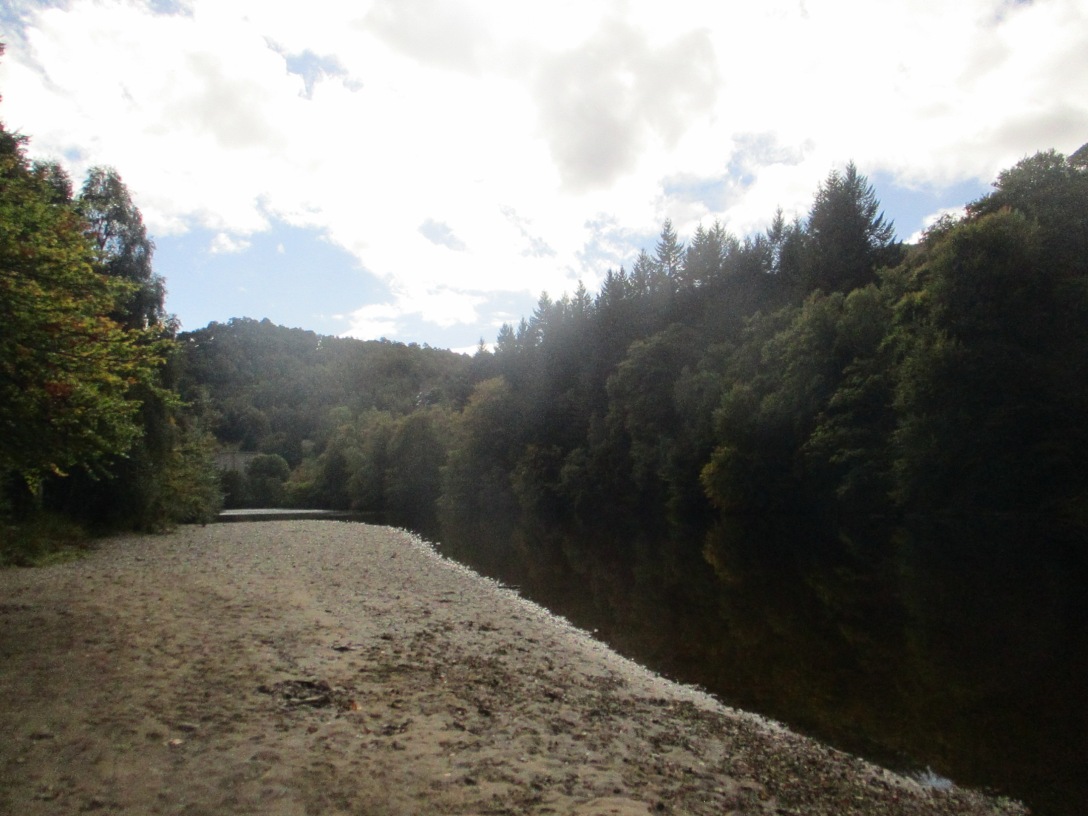 We continue on the dirt road up Glen Tilt, past ‘deer management’ signs, informing us that ‘deer stalking provides employment and is a valuable source of income to Highland communities’. Oh, how the landless masses should be grateful that the landowners of Scotland have provided them with a few jobs, helping the upper class to shoot deer!

We come to a lovely spot by the river and Chris goes for a swim at the Falls of Tarf (potentially a good camping spot for future hikers). But sure enough, as soon as he gets wet it shits it down with rain, and he shivers for hours after.

We camp at Bynack Lodge ruins – a really perfect place for camping. We meet a young man called Gil, the first other person I have met walking the entire SNT. He is much more organised than us, and has booked his accommodation for the whole trail, not leaving any space for bad weather, injuries or tiredness. I put the tent up and Chris cooks dinner before the rain lashes down again.

I’m really nervous about tomorrow morning: there are three river crossings without bridges, and they’re supposed to be the first potentially river difficult crossings of the SNT. I have already read about Oldie Outdoors‘ unsuccessful attempt at getting across safely. I’m hoping that the water doesn’t rise too much.

We begin section 22. The three river crossings are fine. I breathe a sigh of relief as the Geldie only comes up to the middle of my calves. We hike in the rain: a dull, boggy moorland walk through Glen Geldie.

Eventually we come to a small gorge with a dodgy bridge which looks like it should never have been a permanent structure.

The walk through Glen Feshie is one of the most lovely parts of the trail so far, with young birch and pines making a refreshing change from the barren moorland. We hike up scree slopes and through old Caledonian pine forest.

Glen Feshie estate is owned by a billionaire Danish man called Anders Povlsen. The capitalist is one of Scotland’s biggest land owners. Presumably he would have to pay high taxes on his billions if he kept his money in Denmark. Povlsen is successfully rewilding the area, and it’s beautiful. But in doing so, he has murdered the deer population.

Glen Feshie (Ruigh-aitechain) bothy is the first hut that we sleep in on the SNT. It’s luxury! Bothies are walkers’ huts located all over Scotland, and they’re free of charge. Gil, the hiker that we met last night, is there, and then another young guy called Stephen turns up. We have interesting discussions about animal rights, deer culling, sheep farming and the effects of golf courses on Scotland’s landscape.

We begin section 23 and walk through pine forestry plantations for much of the day, with some good views of the lochans below. We pass the ruins of Ruthven barracks and arrive in Kingussie. After enquiring about the cost of hotel rooms, we set up camp by the river, just a few hundred metres from the town centre, and then head to the local chip shop for dinner.

The SNT doesn’t really do mountains. It usually sticks to the valleys between. And this is really frustrating because we are in the famous Cairngorms. So today we begin section 24 and decide to detour up a small mountain called Creag Beag (or something like that!) to try to get some views.

After walking the not-very-wild Wild Cat trail, the weather turns to shit, as usual. Dull white cloud blankets the sky, meaning that it’s going to rain for hours. We hike over boggy moorland for what seems like an eternity, the rain lashing down hard and the wind whipping against us. Urgh, Scotland.

Just as it’s getting dark, we reach four fast-flowing burns (streams), which we need to ford to get to the bothy on the other side. We cross the first three successfully, and we have just one crossing to go as night descends. The final burn – which has turned into a river because of all the rain – is terrifying. We link together to cross, and the water comes to the top of my thighs. I scream with fright: I feel like I’m going to be taken downstream.

We get to the river bank, and I’m so grateful that I’m not alone. I couldn’t have done that river crossing as a solo hiker. I’m also grateful that me and Chris have had experience of river crossings on previous hikes in New Zealand. (Note to other hikers: have a look on the internet for techniques on how to cross rivers safely).

Dalnashallag bothy is old and shoddy, but I don’t care. In this weather, it seems like the most beautiful place in the world. We make a half-hearted attempt at starting a fire, but the chimney is blocked and the room fills with smoke. We fall asleep on the old, stinky sofas, grateful to be warm as the wind howls outside and the rain pounds down on the tin roof.

The wind howls as we leave the bothy the next morning. We hike through the usual moorland and forestry plantations and arrive in Laggan, with its cafe. We eat parsnip soup by a fire as we drip pools of water on the floor.

After a long rest, we begrudgingly start section 25. The next 17km are entirely on asphalt as we follow an old colonial military road up the Corrieyairack pass.

Melgarve bothy is accessible by road, so it is perhaps no surprise that there’s three people there. Sparky, Jim and Paul are friends who meet up regularly, and they’re absolutely obsessed with bothies. Jim has visited 174, Paul has stayed in 200, and Sparky has also visited 150 or so.

A big roaring fire welcomes us, and the men make us welcome. We dry our clothes and they share their food and drink with us. “This is what bothy life is all about,” Sparky says.

Melgarve bothy is one of our favourites, with its big fireplace, comfy sofas and amazing company. 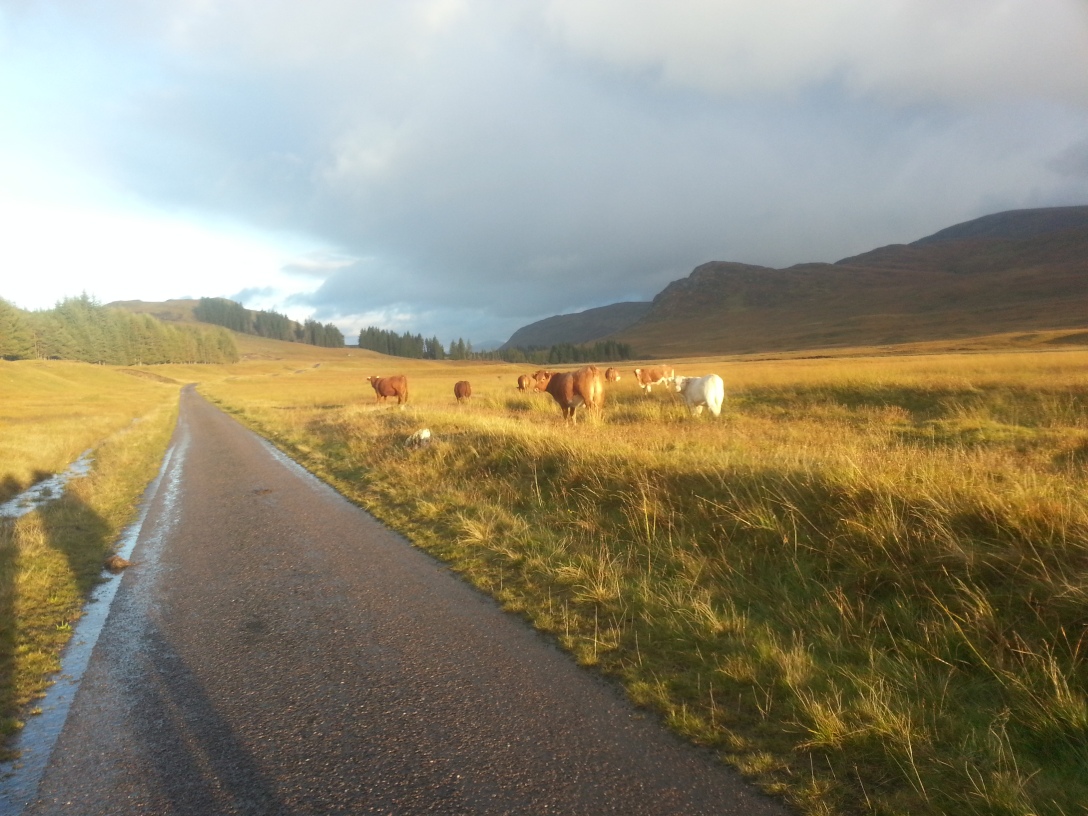 We continue up the Corrieyairack pass as the wind blows hard. The Landrover track and new electricity pylons ruin any sense of remoteness.

We arrive at Blackburn bothy just after lunch and decide to have half a day off walking. I go on a hunt for firewood: an almost impossible task because the bothy – like most others – is in the middle of moorland. Armed with a saw, I squelch along the boggy banks of the burn and finally find a dead tree. I get to work with sawing off some chunks of wood for the fire.

A cyclist called Dickie turns up just as the weather takes a turn and shits it down. We all sleep on the floor, huddling up near the fireplace which is so tiny that we can’t get much warmth. Dickie snores loudly, so we keep waking him to tell him to shut the hell up.

We wake up to strong winds. Luckily for us, the winds are with us. Unluckily for Dickie, he will be cycling into the gales. We hike over moorland on more Landrover tracks. A lot of the SNT has been on Landrover tracks (when it hasn’t been on asphalt).

We arrive in Fort Augustus at lunchtime. We find a lovely little B&B and stay two nights: a much needed rest for Chris who has been walking tirelessly without a break since he joined me.

Fort Augustus is an unfriendly town on the shore of amazingly beautiful Loch Ness. (A note to other hikers: the Londis here is stocked up with most things a hiker might need).  We join the masses of tourists, looking for the Loch Ness monster, but fail miserably. 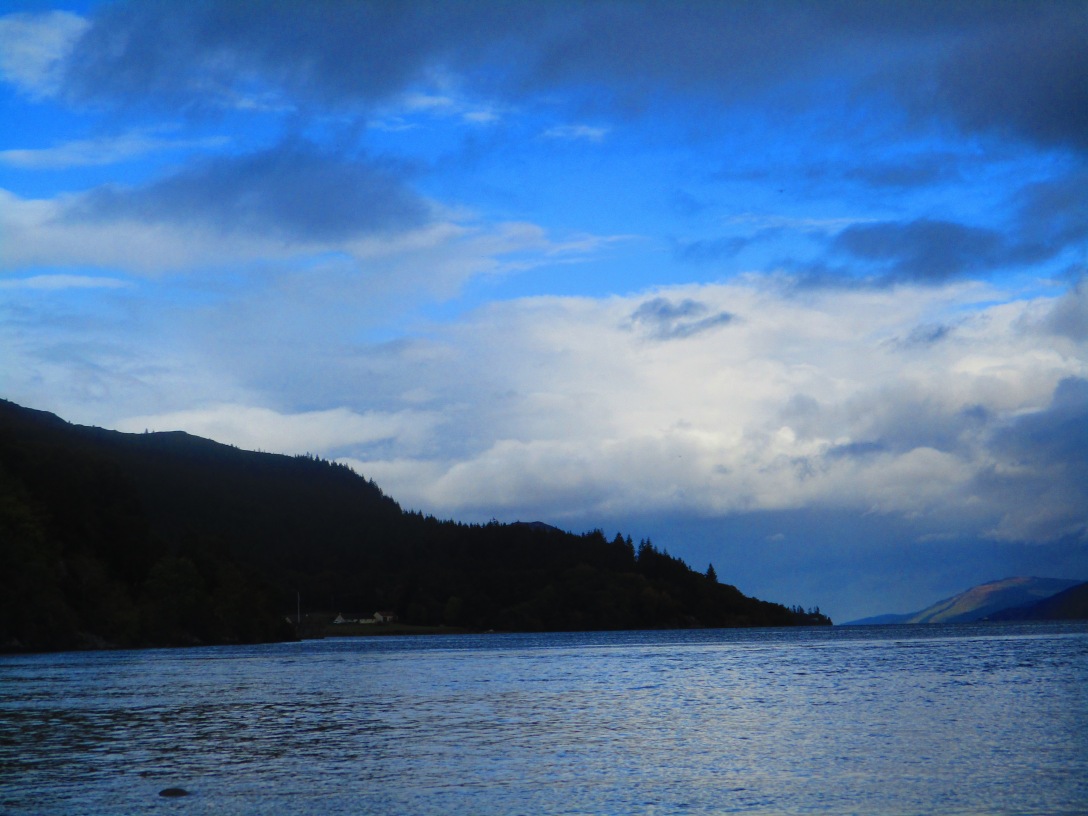 3 thoughts on “Hiking the Scottish National Trail (part 4): bothy-hopping in the Cairngorms”