The Cape to Cape is a week-long 135km hike on the south-west coast of Australia.

The trail is really stunning. We hike over cliff tops (take sun cream!) with spectacular views of the turquoise sea. We walk through native forest, up and down sand dunes and along beaches. We pass stunning rock formations and hop over terrifying blowholes. We walk past a memorial for dead surfers, and then watch surfers tackling massive waves.

The Cape to Cape is an exhausting slog. Although not a technically difficult trail in any way, every step is through sand. Even when you’re not walking on the beach, you’re walking on sand. A week of hiking on this terrain is difficult! I think, “this is more exhausting than the Larapinta Trail!” a number of times. END_OF_DOCUMENT_TOKEN_TO_BE_REPLACED

Hitchhiking Australia is pretty easy and is a really memorable experience. Our waiting times ranged from a couple of minutes to 24 hours!

Many Australians are some of the open, friendliest people we’ve met in the world, so if you’re hitchhiking, expect to be invited in and welcomed wherever you go. And it’s not just drivers who host you. We met people in supermarkets, on local transport, and on the street, who invited us into their homes. And these people contacted their friends in other towns, telling them to host us, so we experienced hospitality everywhere. END_OF_DOCUMENT_TOKEN_TO_BE_REPLACED 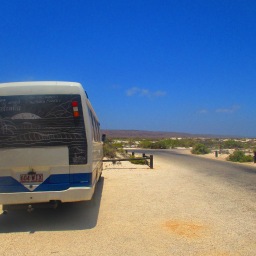 The best rides are worth waiting for. After my longest wait in ten years of hitchhiking, we meet Joel, Bekk and Tillie the dog at a roadhouse in the north west of Australia.

They’re from the east coast, and they’ve quit their jobs and bought a van. They’ve taken a similar route to us, all the way from the east.

“WHY WON’T YOU LET ME SPEAK???” I scream at Gus – our driver – as we hitchhike through the far north of Western Australia. Gus has been yelling at me for the last five minutes.

Gus, like a number of people who give us lifts in Australia, turns out to be a massive racist. He’s a doctor in an Aboriginal town, and he is one angry man. “I thought I could help Aboriginal people because I’m black, because I’m from Zimbabwe,” he says. “But they don’t want to help themselves.”

He goes on a racist rant, not letting us speak. The final straw comes when he spouts government propaganda: “they’re abusing their kids. Sexual abuse is everywhere.”

I start screaming at him that the best thing he can do is to leave the community that he says he’s “helping”. He yells abuse back at me. END_OF_DOCUMENT_TOKEN_TO_BE_REPLACED 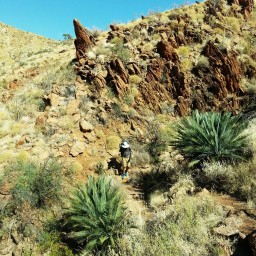 Having completed the Larapinta Trail, I thought I would write about my opinion of it, and add something about the logistics of organising the hike. Read my day-by-day account of the trail here.

Wow! What a hike! The Larapinta Trail can’t be faulted in any way and is one of my favourite ever hikes. Everything about the trail is well organised, from the website, trail notes and really amazing maps (you buy the maps and trail notes as a package), to the campsites and water tanks. The trail is well waymarked, so it’s very difficult to get lost. END_OF_DOCUMENT_TOKEN_TO_BE_REPLACED

The Larapinta Trail is an amazing 223km hiking route in the West MacDonnell Ranges in Central Australia, which took us 17 days to complete.

The trail takes hikers through remote areas without a soul around, and then emerges into tourist-filled gorges. I actually liked this combination!

Hikers can walk the trail in either direction,  so we opted to start from Redbank gorge (which is the official finish-point of the trail) and walk to Mparntwe (Alice Springs), therefore finishing in the city.

We hiked the Larapinta Trail in the first half of October 2017. It’s taken me a while to type my notes up!

This post is a day-by-day account of the walk, including the amount of water we carried (because I know that this was my main concern before I hiked) and the time it took us (without breaks). We pretty much followed the suggested itinerary and usually camped in the locations that the official trail notes suggested.

A follow-up post covers the logistics – how we did the food-drops etc – as well as reflections of the trail, and tips for others. END_OF_DOCUMENT_TOKEN_TO_BE_REPLACED

Uluru: an iconic, magical, sacred landscape. A loud American tour guide shuffles slowly past us with a group of foreigners, spouting nonsense about local customs. Young people take selfies. Bus loads of people seem to arrive by the minute.

We pass the American tour guide and find ourselves alone in silent contemplative bliss. Suddenly, the tour guide appears round the corner with his booming voice, oblivious to the fact that he is standing next to a sign urging visitors to “sit and reflect” in this “quiet place of respect.” END_OF_DOCUMENT_TOKEN_TO_BE_REPLACED

“If you were a woman I’d give you a lift,” a sleazy truck driver says to Chris. It’s late afternoon in Charters Towers in eastern Australia. We’re excited and nervous as we stick our thumbs out and wait for our first car to take us into Australia’s Outback. A billboard poster behind us advertises how to make ‘fuller cattle’.

The sky turns pink as the sun goes down. Miners drive past us on their way to one of Australia’s many mines. Road trains (giant four-carriage trucks) speed past us,  full of cows who have been transported through the 40°C heat.

It’s immediately obvious that the Outback is going to be frustrating for two vegan activists who have just come from protests on the east coast against coal mining.
END_OF_DOCUMENT_TOKEN_TO_BE_REPLACED 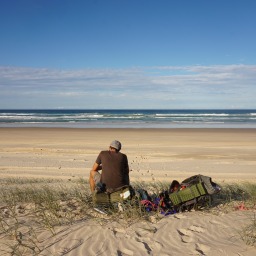 ** I’d like to acknowledge the First Nations peoples of Australia, their elders and their ancestors: custodians of the land that I have been travelling through.**

Imagine a place where dolphins play amongst surfers in the waves. A place where parrots squawk above you and pelicans sit on shores. A place where kangaroos hop into gardens for their breakfast of grass. A place where koalas sleep in eucalyptus trees. A place with thousands of kilometres of perfect beaches. This is Australia’s east coast. END_OF_DOCUMENT_TOKEN_TO_BE_REPLACED

** I would like to acknowledge the First Nations peoples of Australia, their elders and their ancestors, custodians of the land that I have been travelling through.

Throughout my blog posts about Australia, I will refer to the original people of this land as ‘First Nations people’, ‘Aboriginal Australians’ or ‘Aboriginal and Torres Strait Islanders’. I asked a few people which term they prefer, and these were the preferences. The term ‘Indigenous’ was not liked. First Nations Australians often refer to themselves as ‘the mob’, too, and this term is often used by their friends and allies who are of European heritage.** 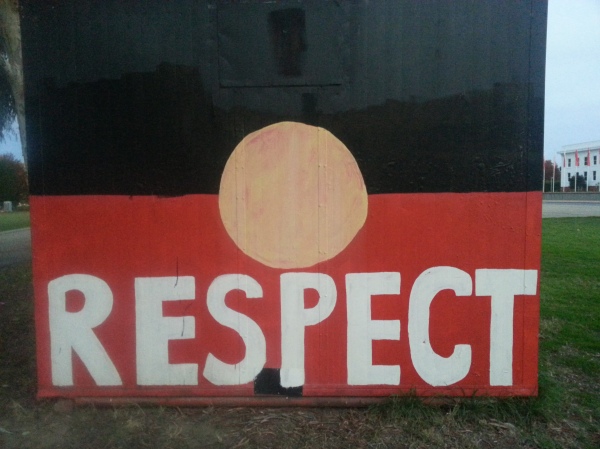 As a child of the 80s, I was in love with Kylie Minogue and Jason Donovan. I spent my dinner times transfixed by Neighbours and Home & Away and I cried my eyes out watching Charlene and Scott’s wedding. An impression of Australia was implanted into my brain: a vision of a blonde-haired, tanned, surf-loving nation.

At school in England, we learnt how the ‘hero’ Captain Cook sailed around the world and ‘discovered’ Australia. There was no mention of the most ancient continuous civilisation on Earth who had lived on the land for 65,000 years before the British came. And there was never any criticism of the ‘Great’ British Empire.

I didn’t think much more about Australia as I grew older. Why would I want to travel to a country that was just like England, only hotter?

But then I discovered the words of Australian journalist John Pilger, and the beautiful songs of Xavier Rudd. Between John’s articles and Xavier’s music, I gained a new understanding of Australia – a country with one of the bloodiest, falsely-told colonial histories of all time. A history where white Europeans committed genocide on a massive scale. A history of racism, land theft, concentration camps and apartheid. An attempt to completely wipe out the Aboriginal peoples of Australia. END_OF_DOCUMENT_TOKEN_TO_BE_REPLACED