The below blog post addresses just some of the problems of (mostly white European) backpacker tourism. When I first travelled in south-east Asia ten years ago, I did not see that my presence could be detrimental to the communities that I was visiting. My awareness of this has grown and evolved over the last few years, and there are, no doubt, so many more issues that I am unaware of with regards to how I impact communities as a white European. Every day is an opportunity to learn and become more aware. 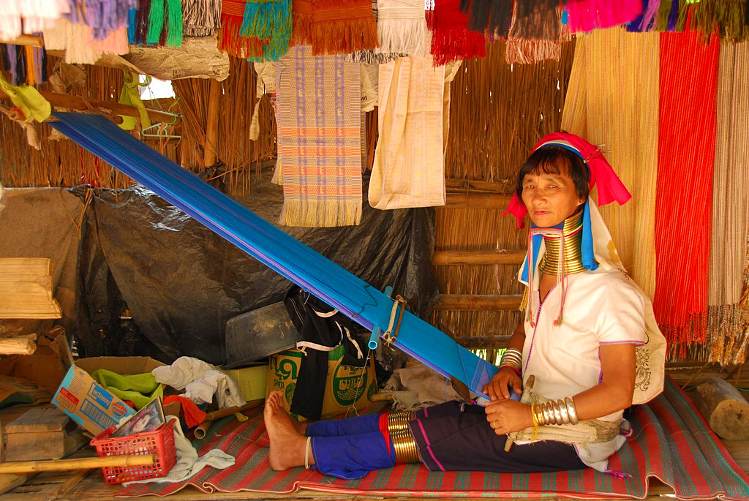 “Hill tribe tour!” “Trek to a longneck village!” “Spend the night with a hill tribe!”

Tour companies and guide books such as the Lonely Planet use different terms for indigenous people, depending on which country they’re referring to. In Laos it’s the term ‘minority’.

I have a problem with the term ‘hill tribe’ (and also the term ‘minority’, but I’m only focusing on tourism in Thailand – and therefore ‘hill tribe’ – in this post). The term is used to describe the millions of different people who are not of Thai ethnicity. It lumps all of these distinctively different ethnicities, languages and cultures into one mass group of the ‘other’ that lives in the mountains. Or as one writer puts it, the term “leaves only the image of the uncivilised hill tribe.” [1]

The white western backpacker, who doesn’t realise how privileged they are to have the means to leave Europe, pays for a ‘hill tribe’ tour. Wandering through a village wearing a Chang Beer vest, taking photos with a smartphone, they long to discover a way of life that is different to the society they’ve left behind in Europe.

Of course, every tourist has a different motive for visiting these villages. At best, the backpacker may be disillusioned with their own society and long to visit a community more in harmony with nature. At worst, a colonialist mentality, unconsciously ingrained into them, may be the motivation. In Britain and other European countries,  where imperialism is a part of our history, a curiosity  with the ‘primitive’ other is ingrained into our culture through school education and through other conditioning, along with the laughable notion that we are more ‘developed’ and ‘advanced’. Language, learnt from a very young age, especially at school, is a tool used to condition those in the west into believing that they are the most ‘civilised’. (But how can we be ‘developed’ when the majority of us live in concrete jungles, separate from nature, working forty+ hours per week for some company director who will take all of the profits whilst polluting the Earth?)

“We have discovered a forgotten tribe community 150km south of Chiang Mai,” a tour company boasts on its shopfront, reinforcing the role of the modern day white explorer trekking into the jungle to ‘discover’ a ‘tribe’.

Problematic language is also often used in books such as the Lonely Planet. “Intrepid explorers can head off on a hill tribe trek,” states the white western travellers’ bible. “Interact with primitive cultures,” it says in its 2014 edition.

Alongside this comes a sense of entitlement. Like the colonisers before us, we feel that it is our right to visit whatever village we like, without thinking that we could have negative impacts on the communities. After all, the most ‘developed’ people in the world can only bring about positive changes, right?!?

Many travellers believe that by visiting villages they are helping needy communities, “giving money where it’s needed the most,” to quote the Lonely Planet. This white saviourism, the idea that we can help, or even save, others from their ‘poverty’, is so ingrained in us that we can’t see that it’s problematic.

Some well-meaning, charitable backpackers want to ‘help’ the villagers that they visit by teaching English in Thailand. The (dubiously named) Hill Tribe Museum in Chiang Rai says of this voluntourism:

“We are concerned that some of the voluntourists may actually be doing more damage to local culture than helping to preserve or strengthen it. We feel that it is better if the visitors learned more from local people rather than having the visitors teaching local people.”

Writer Bani Amor sums up this problematic backpacker tourism in an interview with Bitch Media:

“Backpackers and other tourists like to go where it’s cheap for them to travel even though they have the money to travel in other ways. So that shifts how Indigenous people will relate to their cultures and if they have to kind of perform them in order to make a buck. So all of that creates very problematic effects for those people, these communities, and that industry. It relies on that money. It relies on all that oppression to keep going.”

Indigenous people of non-Thai ethnicity – the Karen, Lua, Htin, Hmong, Lahu, Mien, Akha, Lisu and Khamu – are the most marginalised in Thailand. Their tradition of swidden agriculture has been banned, they have been resettled into lowland areas and violently evicted from their homes (even up to this present day). They are denied landrights, including the right to use the forests that they and their ancestors have long lived within. These same people have been stigmatised within Thai propaganda as producers of opium.

“Only a small amount percentage of hill tribe people are Thai citizens,” states the Hill Tribe Museum in Chiang Rai. “The majority who do not possess citizenship cards are not entitled to the many benefits that Thai people are entitled to. Travel is often restricted to within the province. Access to medical services is difficult.”

In the 1930s their many languages were banned in schools, where only the official Thai language was allowed. There have been programs to assimilate non-Thai peoples by expanding government schools and through Buddhist missionary work. [2]

Indigenous peoples have been scapegoated by the government as those responsible for destroying Thailand’s forests. But the Northern Peasants’ Federation in Thailand states:

“At NPF, we agree…that Thailand’s forests are dwindling and need to be protected. However, the persons and groups responsible for the continuing degradation of Thailand’s forest lands are not small scale farmers and villagers, but are land speculators, resort and plantation owners. They should be the target of any State plan to rehabilitate and conserve forest lands.”

Tour companies that advertise tours to ‘hill tribe’ villages have an opportunity to act in solidarity with those who are marginalised by  joining indigenous activists in speaking out about the oppression. Instead, they use the Thai government’s oppression of people to their advantage, commodifying indigenous people.

“The only attribute of the hill tribes that has been accorded positive recognition is the attraction they hold for tourists. The promotion of tribal crafts, trekking in the northern hills, presentation of tribal dances and music, and advertisements in tourist brochures have all had the effect of emphasising the different-ness of the hill tribes and making them more like commodities than people.”

– From the book Challenging the Limits: Indigenous Peoples of the Mekong Region[3]

Independent travel guide Travelfish has written an article regarding Karen villages in Thailand. The author outlines how problematic the tourist industry can be:

““Regular” or non-“long-neck” Karen refugees fleeing over the border as Burmese troops burn their villages are reported to sometimes be refused entrance into Thailand and unceremoniously shoved back across the border to face advancing Burmese forces — apparently they are not tourist-worthy, while a woman crossing the border with neck rings is welcomed with open arms.

Mon and Karen refugees allowed to cross the border live vast, sometimes squalid refugee camps, while the Kayan are permitted to live in traditional style villages — again for tourism purposes.”

The commodification of indigenous people for tourism furthers their oppression. It doesn’t challenge the core reasons why almost a million people are marginalised in Thailand, or why the forests are being destroyed at an alarming rate, i.e. because of power, nation states, capitalism, patriarchy and racism.

“Nation states [such as Thailand] are not ‘natural’ entities with deep historical roots, even if this is claimed of them,” writer Charles Keyes states. “Rather, they have been been ‘built’, ‘invented’ or ‘imagined’ on the basis of particular visions promoted by leaders of nationalist movements and/or states.” [4]

As backpackers, I feel that it is essential that we always question how our presence is impacting a place, and whether the way that we are travelling is having a negative effect. Let’s think beyond the capitalist-charity-notion of ‘helping’ those in ‘need’ and start thinking about ways to destroy capitalist models that are keeping the majority of people in chains and destroying our beautiful Earth. Let’s stop thinking of ourselves as ‘developed’, and let’s recognise that it is not our given right to visit a community just because we have the means to do so.

If you want to read further…

You can read my blog post about visiting Laos villages on a tour here.

An amazing article by writer Bani Amor can be found here.

Bani writes about white saviourism here and here and their website can be found here.